I’m always curious to see how a fighter responds after suffering a first loss. I’m especially curious when that first loss is via knockout. And that’s where we find Ben Askren this weekend when he meets Demian Maia in Singapore. The good news for Askren is that Maia isn’t known for his power, so I think this is the perfect fight for Askren to come back to. And given Maia’s grappling-heavy style, I really don’t think we’re going to see a different Askren out there. If he were facing a striker, there’d be a good chance we would see a tentative and gun-shy Askren. But that isn’t the case this time.

Instead, we’re getting a grappling fan’s dream. It’s Brazilian jiu-jitsu vs. “Funky” freestyle wrestling. I know these kinds of matchups aren’t everyone’s cup of tea, but I’m curious to see which fighter will be able to exert his will on the ground. I don’t want to see much striking between these two. Let’s see them at their best.

Outside of the main event, the fighter I’m most looking forward to seeing compete on the Singapore card is Ciryl Gane, who meets Don’Tale Mayes. The 4-0 French heavyweight looked great in his UFC debut in August. Gane is a product of the same gym that produced Francis Ngannou, MMA Factory in Paris, and appears to be a heavyweight prospect. If you recall, Gane is known for his striking and power, but he won his debut fight against Raphael Pessoa via submission, which raised a lot of eyebrows. Looking forward to his second effort.

A big step up

Much like most of you, I was surprised to hear that Greg Hardy agreed to replace Junior Dos Santos next month against Alexander Volkov in Moscow. The quick turnaround doesn’t surprise me — this will be Hardy’s fifth fight in 2019 — but the level of competition does. Volkov is good. Yes, he is coming off a loss and hasn’t fought in a year, but he is by far the best opponent Hardy has ever faced. By far. Prior to last year’s loss versus Derrick Lewis — a fight he was winning, by the way — Volkov stopped Fabricio Werdum and Stefan Struve and won a decision versus Roy Nelson. 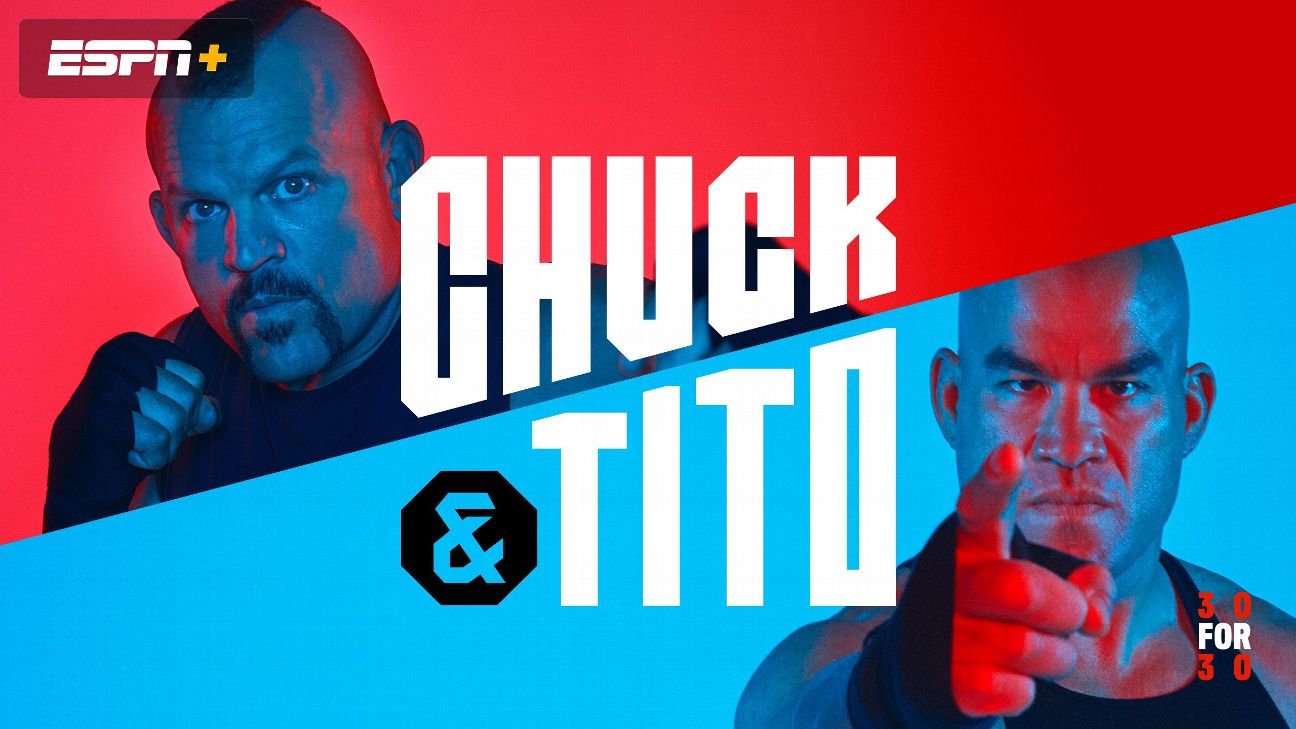 Chuck Liddell and Tito Ortiz, frenemies from SoCal who brought millions of fans to mixed martial arts and supercharged the UFC. Watch on ESPN+

The Russian has competed in 36 more pro fights than Hardy and is taller and with a longer reach too. The UFC sweetened the pot for Hardy to take this fight, I’m told, so perhaps he views it as no harm, no foul, since few will expect him to win. One thing is for certain: We’re about to find out just how good Hardy is. I feel like we already know, but this fight will make things crystal clear. I don’t think he is ready for this level of competition, but we will find out for sure on Nov. 9.

For context, no heavyweight has ever fought five times in a calendar year, so history will be made. More on Hardy later.

This week’s PME is in Bellator: Rory MacDonald vs. Douglas Lima 2. This is the finale of Bellator’s Welterweight World Grand Prix, pitting MacDonald, the champion, against ex-champ Lima. These two first met in January 2018, and it was an absolute slugfest. In the end, MacDonald prevailed to take away the welterweight title.

Now they meet again, but the circumstances feel a little different. I still can’t get over MacDonald’s postfight interview in April. Remember this quote?

“As a man, I feel like God has really called me the last little while, and I don’t know, He’s changed my spirit and my heart. It takes a certain spirit to come in here and put a man through pain and stuff. I just don’t know if I have that same drive to hurt people anymore. I don’t know what it is. It’s confusing. But I know the Lord has something in store for me. He was speaking to me in here tonight, and I don’t know … it’s a weird feeling.”

Since then, MacDonald has won a fight and looked great too. But what if he wins on Saturday and scores the $1 million prize? Would seem like a good time to walk away, right? He hasn’t said that’s his plan, but I can’t help but feel like those feelings he discussed in April haven’t gone away. And you know what? That’s OK. Again, like I wrote back then, that’s totally normal and understandable. In fact, I loved that he said that. I’m just wondering how he will feel after going potentially five rounds with Lima.

That fight is the feature bout of another back-to-back Bellator weekend in Connecticut: Bellator 231 on Friday and Bellator 232 on Saturday, both at Mohegan Sun. Other fighters I am looking forward to seeing: Nick Newell, Jake Hager, Robin van Roosmalen, Mandel Nallo, Patrick Mix and Lance Gibson Jr.

The Maycee Barber–Paige VanZant saga is interesting, and there’s no right answer. I get why Barber is calling out PVZ. She’s the most famous fighter in the division and one of the most famous female fighters in the world. The fight makes sense for her at this time. If I were managing Barber, I would tell her to do the same.

However, on the flip side, if I were managing VanZant, I would advise her against taking the fight, and here’s why: VanZant has one fight left on her UFC deal. She will likely test the free-agent market in the very near future. It’s important to win that last fight before free agency, so momentum and leverage are on your side. I’m not suggesting Barber isn’t beatable — everyone is — but she is on a roll right now and seems to be getting better with every win. Does VanZant need to take this fight in order to cash in with, say, Bellator? She doesn’t. She just needs to win against anybody. Would it be nice being the first one to beat Barber, the rising star? Sure. But it’s unnecessary. Basically, the risk outweighs the reward for PVZ.

The UFC wants the fight. Of course it does. The promotion knows PVZ wants to test the market, so it is going to match her up against the toughest opponent out there. This is how it’s done. So VanZant has to be selfish this time. If she had multiple fights left on her deal, I’d say her back was against the wall. But that’s not the situation. Gotta be strategic here. Curious to see how this one plays out. The UFC often gets what it wants in the end (see Usman vs. Covington), but something tells me VanZant will stick to her guns on this one.

— I’m all-in on Jon Jones vs. Dominick Reyes. Reyes sold me during Monday’s show. I’m a sucker for that kind of fire. I also want to see how Jones deals with Reyes’ reach and power.

— I’m still not sure what to make of the Greg Hardy Inhalergate, but the more people I talk to and the more I read about it, the more I feel like the Massachusetts State Athletic Commission jumped the gun by overturning the result. He did ask if he could use it, and no one stopped him. Really weird story. As of now, Hardy and his team have yet to decide whether he will appeal, I’m told, but they are leaning in that direction.

— Chris Weidman wants to keep on fighting. That is his right. If so, I’d like to see him go back down to 185. I think the big boys at 205 might be too big, after all. I really liked his Instagram post on Tuesday. Defiant yet measured.

— WWE is using Cain Velasquez all wrong. It’s like they ignored the amazing athleticism he showed off in his first two pro wrestling matches and want him to be the prototypical brute pro wrestler. Mistake. Speaking of WWE, Triple H told me last week that they are interested in Daniel Cormier in some capacity, but only after his fighting days are done.

Nineteen years ago Tuesday, my friends and I drove to Albany, New York, to watch Kurt Angle win the WWF championship for the first time. What does this have to do with anything? Not much, other than the date Oct. 22, 2000, is etched in my brain forever. Every Oct. 22 I send the four guys I went with to WWF No Mercy an email wishing them a happy anniversary. We went super early and saw a bunch of the wrestlers hanging around outside the arena. We even saw Kane without his mask (when that was a cool thing!). After the show, we drove from the arena blasting Angle’s theme music. It was a great time. Happy anniversary!

Zigazoo launches to be a ‘TikTok’ for kids, surpasses 100,000 uploads and downloads

Coronavirus: Discrimination row over MPs queuing up to vote