A company boss who asked a female manager ‘Can I Harvey Weinstein your a***?’ has been told to hand her a £35,000 sexual harassment payout.

Mark Harris subjected Lorraine Shotton to months of ‘unwanted sexual conduct’ after he was unable to shake off his ‘sexual infatuation’ with her, an employment tribunal found.

Ms Shotton, who started as a secretary and worked her way up to general manager of Somerset-based upholstery business The Foam Shop, was awarded the payout despite the tribunal finding she had initially ‘flirted’ with her boss.

Employment Judge Matthews made the finding having heard witnesses describe how at an office Christmas party, after proclaiming that she used to be ‘a cage dancer in Ibiza’ and was ‘not wearing any knickers’, she began to dance with her boss and ‘was pushing herself into Mr Harris in a very provocative manner’. 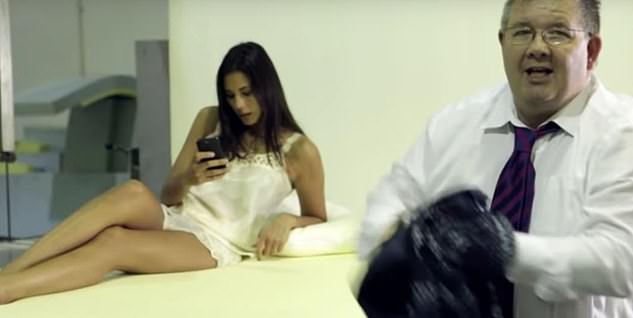 Mark Harris, pictured with a model in an advert for his mattress video. He has been ordered to pay a store manager £35,000 in compensation for sexual harrassment and wrongful dismissal

However, as time went on, she ‘changed her mind’ and said she made it clear to the company MD that his wandering hands were not welcome after an incident during which, when offered a bacon bap, her boss had replied ‘No, I want you’ and lunged at her.

Judge Matthews found that he ‘could not overcome his infatuation with Ms Shotton, could not change his behaviours in any significant way’.

Ms Shotton eventually quit her job, telling the tribunal that her treatment by Mr Harris had effectively forced her to do so.

The company, Mark Harris Upholstery Ltd, must also pay another £7,220 over Ms Shotton’s unfair and wrongful dismissal and in regard to holiday pay she is owed, taking the total payout to around £35,000.

Mr Harris, 59, trained as an upholsterer in his family business and started Mark Harris Upholstery, now operating as The Foam Shop in Livingstone Way, Taunton, in 1986.

He turned it into a thriving business, appearing in many of its online promotional videos, including one in which he is featured lying on a bed with a scantily-clad model.

In it he says: ‘Foam cut to size. I grant you, not as sexy as Roxanne here, but it’s what gets me out of bed in the morning.’

Harris, pictured with model, was said to have become infatuated with employee Lorraine Shoton who danced provocatively with him one Christmas party

She was ‘not above flirting’ with her boss, the judge said, and she told the tribunal that Mr Harris at first ‘was charming, funny, complimentary and we became friends’.

But by November 2016 she wanted to bring things back to a purely professional footing.

She complained that her boss had ‘gradually introduced’ unwanted touching.

‘He would spontaneously kiss me, stroke or sniff my hair, put his hands inside my clothes, sexually hug me, sit me on his knee, ask for sex/sexual favours,’ she told the tribunal.

Mr Harris trained as an upholsterer in his family business and started Mark Harris Upholstery, now operating as The Foam Shop in Livingstone Way, Taunton, in 1986

The tribunal also saw a diary entry by Ms Shotton, claiming that her boss offered ‘to come round my house for tea when his wife away, bring a takeaway and cuddle on the sofa’.

She drew a line during a November 2016 meeting, prompted by ‘an incident a few days before in which she says that Mr Harris when offered a bacon bap, had replied ‘No, I want you’ and lunged at her’, the judge said.

But after her making it clear that the physical touching must stop, she said Mr Harris became ‘sulky’ and ‘intimidatory’ before further incidents ensued.

She said another meeting between the pair nearly a year later ended with Mr Harris cuddling Ms Shotton and saying: ‘Can I squeeze your bum, no, squeeze your t*t, no, can I Harvey Weinstein your ar*e?’. 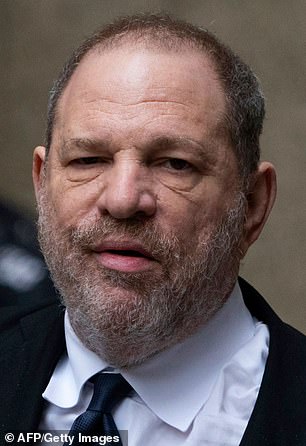 Ms Shotton later wrote a letter to him regarding that meeting, reading: ‘At the end of the meeting, you approached me and asked for a hug as you have done in previous meetings…I felt I had no choice.

‘You then made lewd comments to me and said ‘can I Harvey Weinstein your ass?’

‘I left the two-hour meeting once again feeling violated.’

She then lodged a grievance at work against her boss, but it was rejected.

After being accused of gross misconduct, Ms Shotton resigned in April 2018.

She went on to tell the tribunal that she had been sexually harassed and then constructively dismissed.

Judge Matthews in his ruling said: ‘Our findings are that from the beginning of Ms Shotton’s employment up to and including 10 January 2018, Mr Harris engaged in a continuous course of conduct of a sexual nature towards Ms Shotton.

‘Prior to the 18 November 2016 meeting, we find that Ms Shotton at the very least displayed some ambivalence about whether the conduct was wanted or not.

‘We think…Ms Shotton flirted with Mr Harris and probably put up with his conduct of a sexual nature as a convenient means of securing her job and influence.

‘As time went on in this period, Ms Shotton changed her mind and started to protest.’ 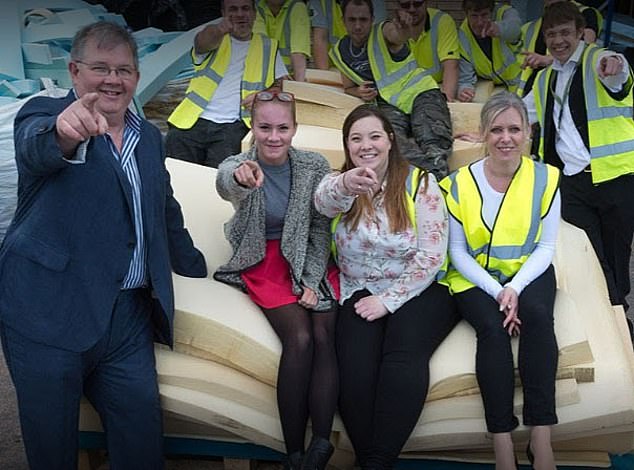 Mr Harris, pictured had received a ‘clear warning off’ from Ms Shoton which he ignored, the judge said. None of his colleagues pictured are connected with the current case

There had been a ‘clear warning off’ at the meeting in 18 November 2016, said the judge, adding: ‘Thereafter, we have no doubt that the conduct was unwanted.

‘The evidence is that Mr Harris was sexually infatuated with Ms Shotton and the purpose of his unwanted sexual conduct was sexual gratification,’ the judge said, concluding that she was sexually harassed after 18 November 2016.

The judge also found Ms Shotton was a direct victim of sex discrimination and had been ‘unfairly constructively and wrongfully dismissed’.

‘From then on, Ms Shotton did not want any physical contact with Mr Harris. She wanted to be left alone in that respect and allowed to get on with her job.

‘Had that happened, all may have been well.

‘What happened however, as the facts demonstrate, is that Mr Harris could not overcome his infatuation with Ms Shotton, could not change his behaviours in any significant way and, as Ms Shotton feared, took his frustrations out on Ms Shotton in the workplace.’

Speaking today Mr Harris said it would be ‘inappropriate’ for him to comment about what happened but said he disagreed with the verdict.

He added: ‘I disagree with the verdict and what was alleged to have happened but I can not really comment.

‘It would be inappropriate for me to comment because of what she said about her own state of health at the tribunal.

‘I would not want to cause her any pain or stress as she is unwell according to her own evidence she gave at the tribunal.

‘It would not be reasonable of me to anything and I would rather keep a dignified silence.

‘I would just encourage people to read the full tribunal and make their own minds up.’

He also declined to comment on whether he had any regrets or whether there was anything he would like to say to the claimant following the verdict.