The Miami Dolphins selected Alabama’s Tua Tagovailoa with the No. 5 pick in Thursday night’s 2020 NFL draft with hopes he will be the answer to their long-standing franchise quarterback question.

After months of debate about whether to take Tagovailoa or Oregon’s Justin Herbert, the Dolphins made their choice clear by going with the left-hander who has the talent to change a franchise if he stays healthy.

Dolphins general manager Chris Grier and coach Brian Flores did substantial homework on each of the top quarterbacks, but it was their desire for a player who exuded leadership, charisma, the “it factor,” accuracy and playmaking ability that made Tagovailoa the choice.

Miami also was Tagovailoa’s preferred destination from the moment he declared for the NFL draft, according to sources close to the quarterback, who said he’s ecstatic to land with the Dolphins.

Through all the smokescreens and negative reports on Tagovailoa, the Dolphins loved the Alabama QB for more than a year and got comfortable enough with the medicals to take him. They kept their true plans close to the vest in hopes of preventing teams from trading ahead of them to get Tagovailoa. Ultimately, they resisted trading up, waited it out and landed Tagovailoa. 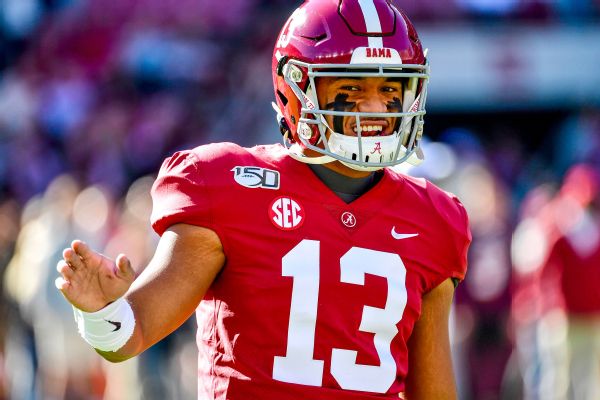 Many Dolphins fans will be ecstatic with this pick. A group of them began the “Tank for Tua” campaign that became popular throughout the 2019 season, and even though the Dolphins ultimately didn’t tank, winning five of their last nine games for a 5-11 finish, they still ended up with their guy.

Tagovailoa’s biggest question mark is health. He had several injuries at Alabama, including a fractured left index finger, a right knee sprain and bilateral ankle injuries. But none was bigger than a hip dislocation and wall fracture that ended his 2019 season in November and required surgery. The situation was complicated when NFL shut down team facilities and prevented organizations, including the Dolphins, from bringing in Tagovailoa for medical evaluations with their own doctors and in-person workouts due to the coronavirus panademic.

Tagovailoa told ESPN this month that he is 100 percent healthy following the November surgery to repair his right posterior wall fracture and dislocated hip. The two orthopedic surgeons directly involved in his surgery and recovery also told ESPN’s Stephania Bell that he will be fully healthy to participate in football activity when NFL training camps open.

Thomas Byrd, a hip specialist in Nashville who was independent evaluator for Tagovailoa’s medical recheck, told ESPN that his x-rays looked “pristine,” that a CT scan of his right hip joint space mirrors the left, and that the player “looks as good as (he’s) ever seen 5 months out” after similar injuries.

Ultimately, it’s still a calculated risk. But Miami felt good enough about the Tagovailoa package to take a chance on the talented quarterback.

It’s been 20 years since Dan Marino, the Dolphins’ last true franchise quarterback, retired. It’s been 24 seasons since the Dolphins last had a Pro Bowl quarterback. They hope that, with Tagovailoa, all of that will change sooner than later.

However, the Dolphins may not expect Tagovailoa to jump into those expectations quite yet.

Ryan Fitzpatrick, 37, likely will be the favorite to begin the season as the Dolphins’ starting quarterback due to his familiarity with the team and offensive coordinator Chan Gailey in a shortened offseason. But he has welcomed the idea of mentoring a rookie QB. Tagovailoa should have a smooth transition learning under Fitzpatrick.

Dolphins fans can rejoice because they know have their quarterback — one that many of them wanted for over a year — and now the job turns toward protecting him.

Since Dan Marino retired after the 1999 season, the Dolphins have started 21 different QBs. That’s tied with the Redskins for the third-most since 2000, behind only the Browns (29) and Bears (23) over that span. Tagovailoa is the Dolphins highest drafted quarterback since Hall of Famer Bob Griese in 1967. He’s also the first left-handed quarterback to be drafted since Tim Tebow and Sean Canfield in 2010.