In the run-up to the general election, the results of opinion polls will be given a lot of prominence. But how do the polls work and how valuable are they?

What is an opinion poll?

Opinion polls provide a snapshot of people’s views on a particular issue. They are widely used when elections are approaching.

People can be asked which party they would vote for, which issues most concern them, or for their views on party leaders.

Opinion polls can be useful to see how different parties are doing, but they may not reflect the make-up of the next Parliament.

The UK’s first-past-the-post voting system means that the local candidate in each constituency who receives the most votes becomes an MP. And the party with the most winning candidates nationally normally forms a government.

So, a party that is predicted to have 10% more of the vote than its main rival, for example, will not always end up with 10% more MPs.

How accurate are the results?

They are not perfect, but the average of errors on polls going back more than 70 years is only a couple of points, says Will Jennings of the University of Southampton.

Over the last few elections, 90% of polls conducted just before the election have been within four percentage points of the vote share for the major parties.

What happened in recent elections?

Poll results were criticised after both the 2015 and 2017 general elections.

A review by the British Polling Council said that polls before the 2015 vote were among the most inaccurate since surveying began. They failed to predict the Conservative Party’s majority win and over-represented Labour voters.

The review suggested the main reason was unrepresentative sampling.

Two years later, the opinion polls all suggested a clear Conservative lead over Labour in the run-up to the election. While the Tories did win, it was without the predicted majority.

The polls were right about theirs and the Lib Dems’ vote share, but they were wrong about Labour’s. It was also thought that an assumption of a low turnout from younger voters was wrong. 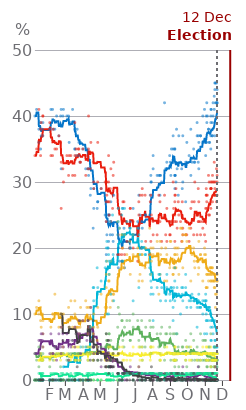 Who takes part in opinion polls?

The number of people questioned varies from poll to poll.

Most political polls ask between 1,000 and 2,000 people. However, to be involved you usually need to have signed up to be on a survey panel, unless the poll is conducted by phone or in person.

People do not join these panels specifically to give their views on politics. Many will only ever be questioned on issues like their views on the best pizza delivery firm or where they go on holiday.

But the panels are also generally where the opinion poll companies collect their views at election time.

The panels can be very big – some containing up to one million participants. However, the actual number of people actively taking part on a regular basis may be only about 25% of such a total.

People are given various incentives, such as shopping vouchers or a small financial reward, for doing the surveys.

What makes a poll representative of the country?

Many people will never be asked questions by pollsters, but this does not mean that polls are not accurate.

The two main methods of ensuring that polls represent the voice of the nation are random sampling and quota sampling.

Quota sampling means having certain numbers of people of certain ages, genders and locations taking part in a survey.

The results can be released very quickly. A poll can be finished in the afternoon and the results published later that evening.