Three nights into the 2019-20 NBA season and the league leaders in net rating are … the Phoenix Suns. Just like we all predicted.

That’s merely one sign not to overreact to 48 minutes of regular-season basketball. Still, every game matters, and a few early trends already have emerged that I’m eager to watch more closely.

It’s only one game, but … the Lakers need AD to be money from outside

One big, early question in Lakerland: Can Anthony Davis shoot well enough to open up the offense? It’s too soon to tell, but the eventual answer will determine a lot about just how sharp the teeth of this offense can be.

There’s no question that Davis is one of the most talented players in the NBA. Right now, though, all that talent hasn’t really translated to his J. When you dive into his shooting data, some troubling things emerge.

Let’s start with Tuesday’s loss versus the LA Clippers.

Davis had 25 points on 21 shots, but it’s how he got there that raises a familiar red flag. 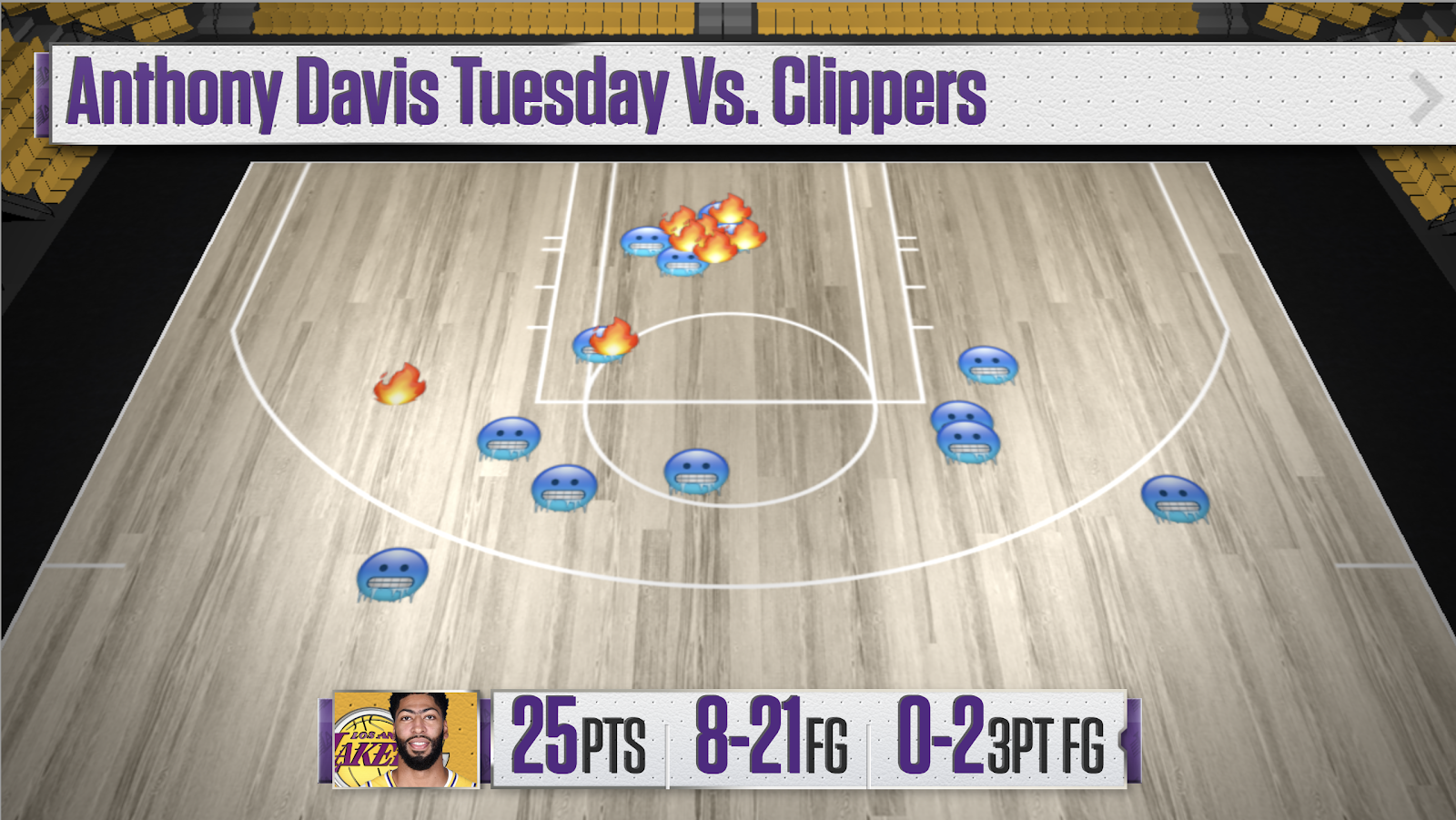 We can quickly see that Davis was very effective in the paint, racking up seven of his eight buckets there. Davis is a monster inside. He ranked third in the NBA in total points in the paint in 2017-18, while his new teammate LeBron James ranked No. 1.

But in a world where he is playing alongside James, it’s key that Davis can get out of the way sometimes and hit some jumpers. Here’s the thing, though: Davis is mostly mediocre outside of the paint.

Against the Clips, he hit just one of his seven extended 2-point tries and missed both of his 3s. That small sample size is relevant because it harkens back to a bigger, more troubling trend. Check this out: 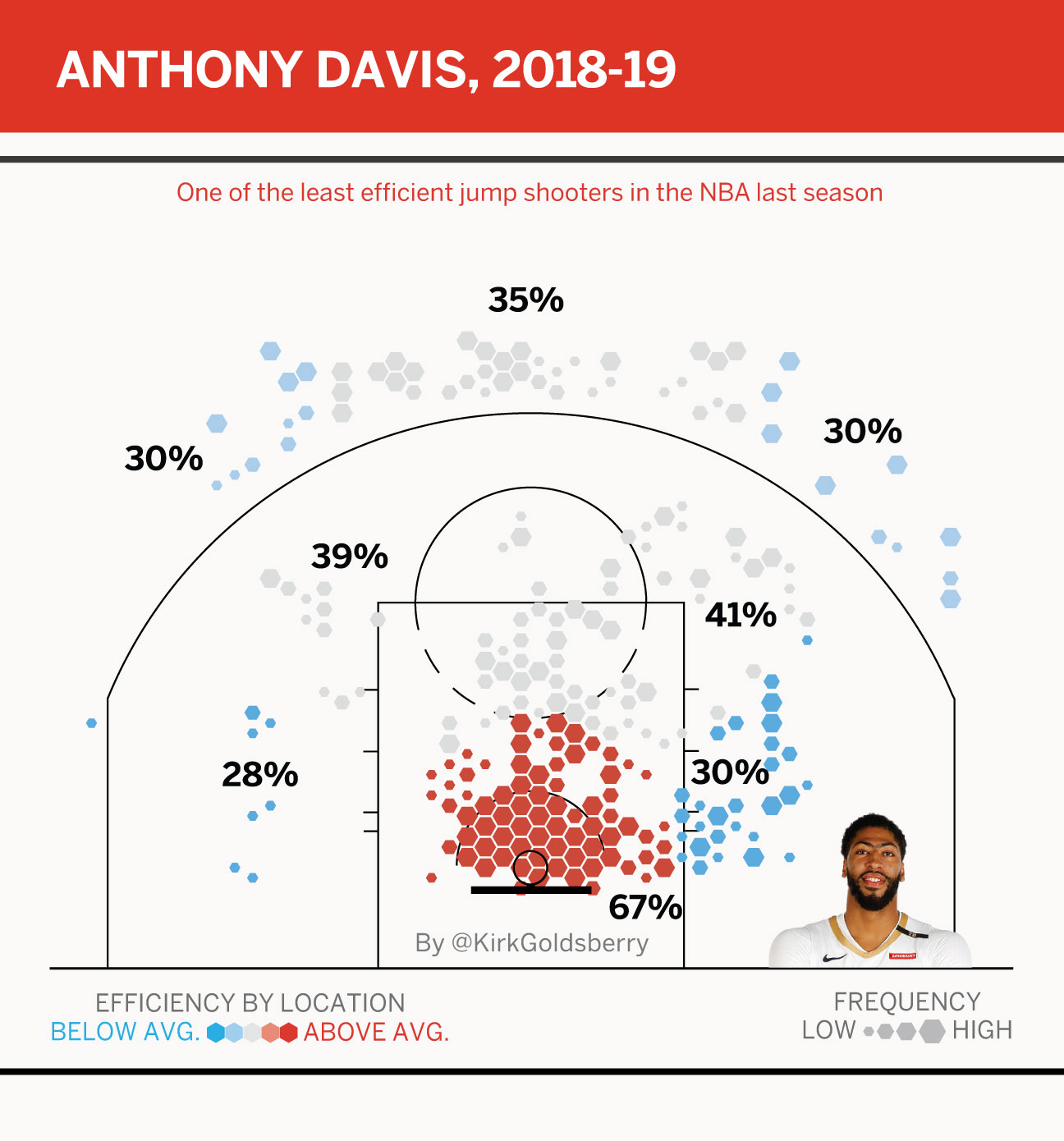 Last year, Davis was very active and very inefficient in the midrange, converting just 36% of his shots. Yuck! He also was below average from downtown, where he converted 33% of his tries. The bottom line is that jump-shooting is a big part of Davis’ portfolio, and his numbers are more Russell Westbrook than they are Kevin Durant.

Anthony Davis outside the paint

At the exact point in his career when we would expect these numbers to escalate, they did the opposite. The Lakers are hoping that Davis’ jump-shooting stats will improve now that he is playing in the LeBron ecosystem. Davis is bound to get a lot more open looks and take fewer difficult shots. It certainly didn’t help Davis that he has had the fourth-toughest attempts in terms of shot quality in that group of 130, per Second Spectrum.

And that all sounds great until you consider the following stat:

You know who also isn’t a great jump shooter? Reigning MVP Giannis Antetokounmpo. He rates even worse than Davis. But the Milwaukee Bucks are designed to take care of that with effective 3-point shooters in a well-crafted system.

If you can’t shoot, you can’t space. And if Davis can’t effectively space the floor, the Lakers’ offense will have issues. Davis often shares the court with Dwight Howard or JaVale McGee. Opposing bigs will sag every game, clogging James’ driving corridors, providing interior help, grabbing boards and generally muddying things up. Danny Green‘s reliable stroke can only help so much on its own.

James’ championship teams always have featured great, stretchy bigs. In Miami, Chris Bosh could pick-and-pop as well as anyone in the league. In Cleveland, Kevin Love and Channing Frye could hit 3s reliably enough to dilute the abilities of opposing centers.

If Davis is ineffective as a shooter, that means many of the Lakers’ most important lineups will feature two bigs who don’t space well enough to declutter the deep paint. Dudes like Nikola Jokic, Rudy Gobert, Clint Capela and Hassan Whiteside will have a much easier time against this squad that way.

There’s no question Anthony Davis can be a terrific-shooting big. But it’s fair to question whether he is right now — and it’s win-now time for the Lakers.

It’s only one game, but … Luka loves him some Hardenesque isos

Luka Doncic is 20 years old and already the closest thing we have to James Harden anywhere outside of Houston. Doncic put up 34 points on 19 shots in Wednesday’s win over the Washington Wizards, and half of those points came off of isolations.

Dallas isolated Doncic 13 times, with the sophomore star finishing the play on 10 of those isolations while yielding a whopping 1.7 points per possession.

This is something to watch, because as Houston and Harden already have shown us, hero ball is back in fashion — assuming the hero you’re isolating is efficient. And if Wednesday is a fair indication — a big if … after all, it was against the Wizards — then it appears Dallas has an effective hero.

Like Harden’s isos, Doncic’s are terrifying because he combines great handles with both a terrific step-back move and the ability to drive to the bucket. If a defender overplays either move, the other option becomes instantly available. Out of his 10 iso shots on Wednesday night, four were step-back 3 attempts and the rest were drives.

Last year, Doncic averaged five isos per game. That number should double or even triple this year, even with Kristaps Porzingis around. In case you think that’s crazy talk, just consider that Harden averaged more than 20 isos per game last year, per Second Spectrum. There’s no reason why the Mavs shouldn’t lean on Doncic more and more and more as this season unfolds if he remains this reliable on his own.

It’s only one game, but … are the Raptors the new Rockets?

It was ring night in Toronto on Tuesday, when the Raps defeated the new-look New Orleans Pelicans in overtime.

Toronto amassed a whopping 130 points in that game, but it’s how they got there that is noteworthy: They took only four midrange shots all game long!

Of the team’s 103 field goal attempts, only four of them were non-paint 2s — all of which belonged to Serge Ibaka and none of which went in. Yes, zero of the team’s 130 points came from the midrange. 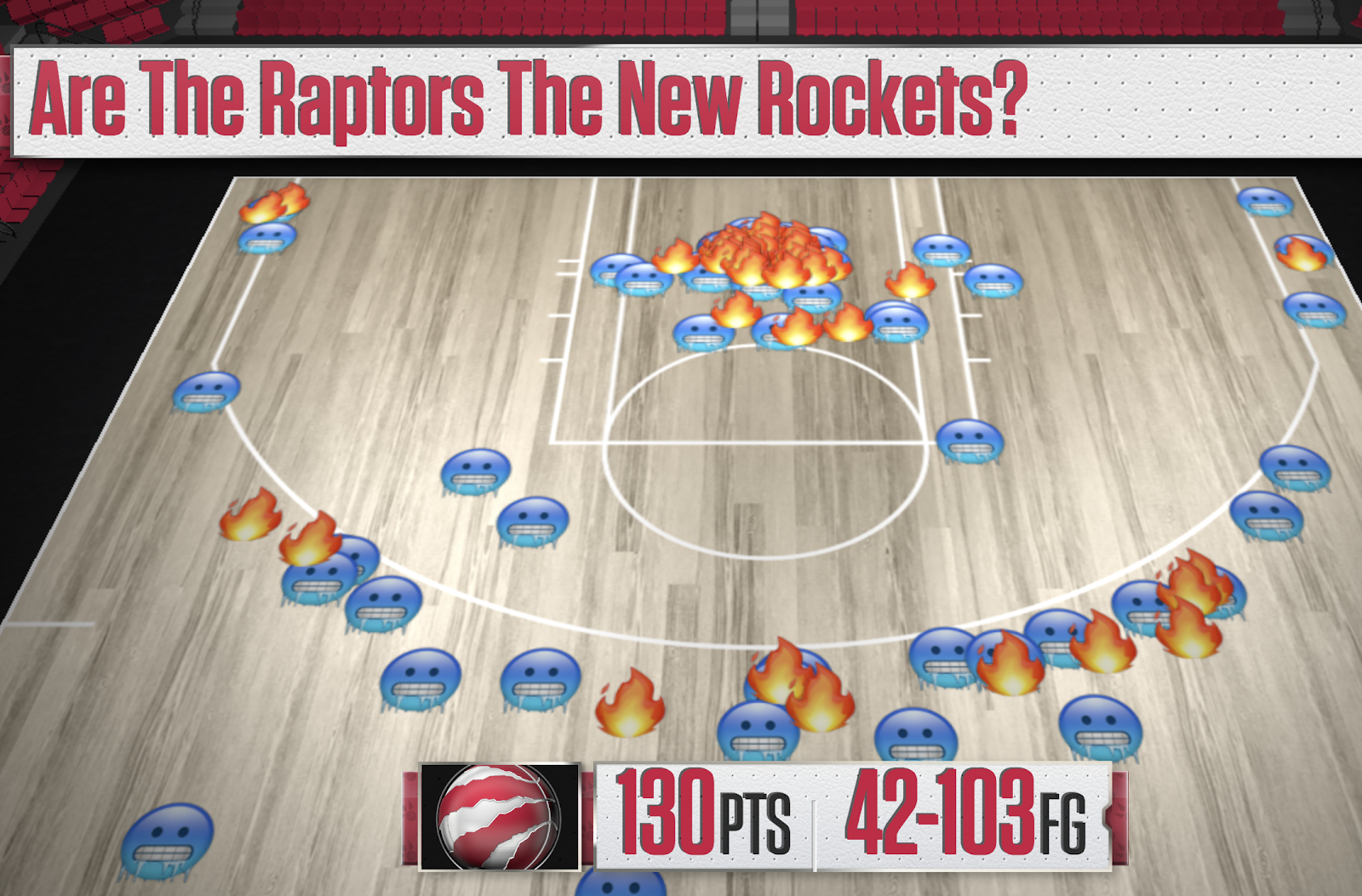 If Game 1 is any indication, the post-Kawhi Leonard Raptors are adopting an extremely analytically oriented diet featuring only 3-pointers and shots in the paint.

That junk food in the midrange is great with outlier stars such as Leonard. Sometimes it’s the only decent look you can get. But for this current group in Toronto, the tweaked shot selection makes plenty of sense.