Companies sold a lot of wireless headphone in 2019. You already knew that though, right? What you probably didn’t know was precisely how many constitutes the aforementioned “lot.” New numbers from Canalys shed a light on those successes. The research firm’s classification of audio products is a little wonky, but it drives the point home nonetheless.

In their terms, we’re talking specifically about “true wireless stereo” products under the umbrella of “smart personal audio devices” — in other words, wireless headphones. Taken as a whole, the category (which also includes tethered wireless earbuds and over/on ear wireless headphones) hit 96.7 million shipments in Q3, making a 53 percent year over year growth. For the fourth quarter (including the holidays), the number is expected to break 100 million, pushing things to around 350 million for the full year. 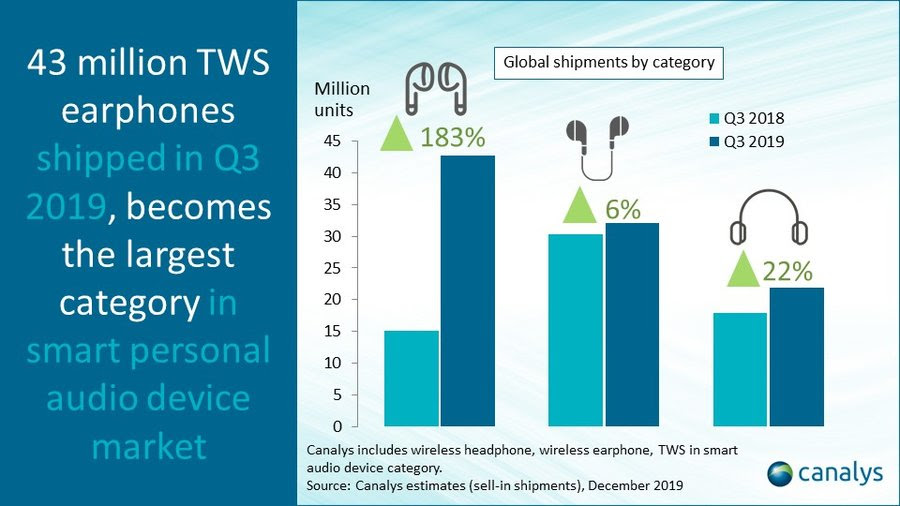 The “true wireless stereo” segment (fully wireless earbuds) saw a 183% growth for the quarter, overtaking wireless earphones and wireless headphones in the process. Another not surprising thing: Apple led the pack, far and away. The company controls 43% of the market, per the firm. Xiaomi and Samsung are a distant second and third, respectively, at 7% and 6%, respectively. And Apple’s numbers will likely continue to look pretty good with the warm reception of the AirPods Pro.

The market is likely to get even more interesting in 2020 with the arrival of new products from giants like Google and Microsoft, coupled with an increased presence of low cost alternatives. But Apple’s stranglehold, particularly among iOS users, will be a tough one to break.