Building effective propulsion systems for satellites has traditionally been a highly bespoke affair, with expensive, one-off systems tailor-made to big, expensive spacecraft hardware. But increasingly, companies including startups are looking at ways to provide propulsion tech that can scale with the projected boom in demand for orbital satellites, including cube sats and small sats, as the commercialization of space and advances in sensor, communication and launch technology broaden the scope of those working in this bold new frontier.

Morpheus Space, which began life as a research project at the University of Western Germany, has accomplished a lot when it comes to propulsion in the short time since its official founding around a year and a half ago. The Dresden-based startup already has sent some of its thrusters to space where they’re actually providing propulsion, and it’s working with a number of clients and potential clients including NASA’s Jet Propulsion Laboratory. The startup also just wrapped up its participation in Techstars’ inaugural Starburst Space Program in LA.

“Our motivation behind starting Morpheus Sapce was the lack of maneuverability of, especially small satellites in space,” explained Morpheus CEO and co-founder Daniel Bock, who I spoke to at last week’s International Astronautical Congress in Washington, D.C. “We have around 2,000active satellites in space, and in the next few years this will increase by 10x. We have to deal with that. So the first step in how we want to solve that is with our proportion systems, to give mobility to small satellites.”

The startup has seen a ton of inbound interest, and has even had conversations with the CTO of NASA and the CEO of Aerospace Corporation based on the strength of its technology. But what’s so special about what they’re doing, vs. what has already been available for satellite propulsion? Put simply, “it’s the world’s smallest and most efficient propulsion system,” according to Morpheus Space co-founder István Lőrincz. 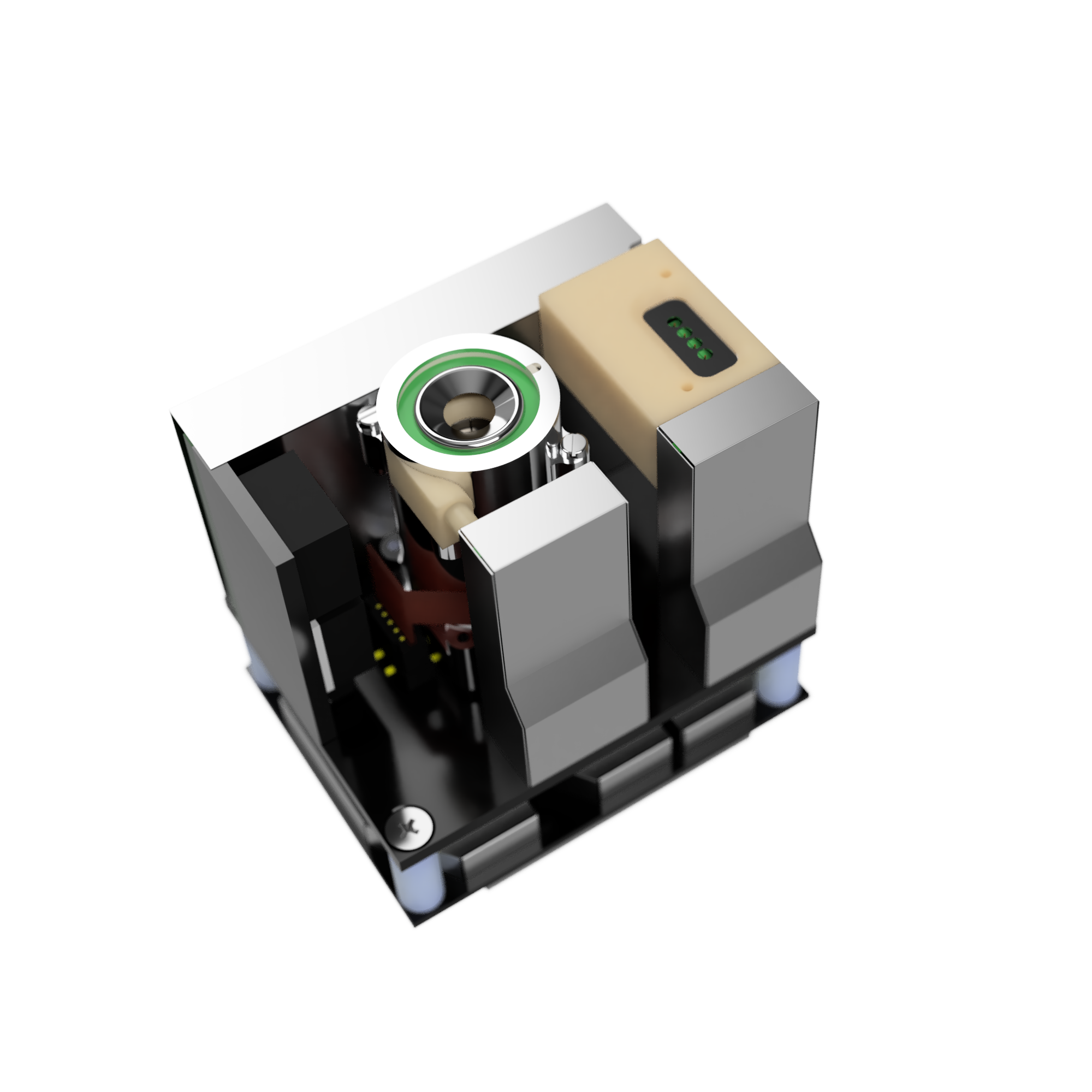 Morpheus’ thruster uses gallium as its fuel source, which allows it to be very efficient, with an operating linespace of up to three or more years – non-stop, Lőrincz told me. When you factor in the low cost of these thrusters vs. other solutions, and the ability to make them incredibly small (one thruster, along with electronics, is not that much larger than your average USB charger), you get a product that’s tailor made for the cost-sensitive emerging new space industry. Ensuring the mass of these thrusters is small pays off big dividends when it comes to thinking about launch costs, and the fact that these are ‘LEGO-like’ in their modularity means they can suit a variety of different clients’ needs.

“You can build propulsion systems for satellites that are below one kilogram, up to those the size of trucks, just by creating arrays,” Lőrincz says. 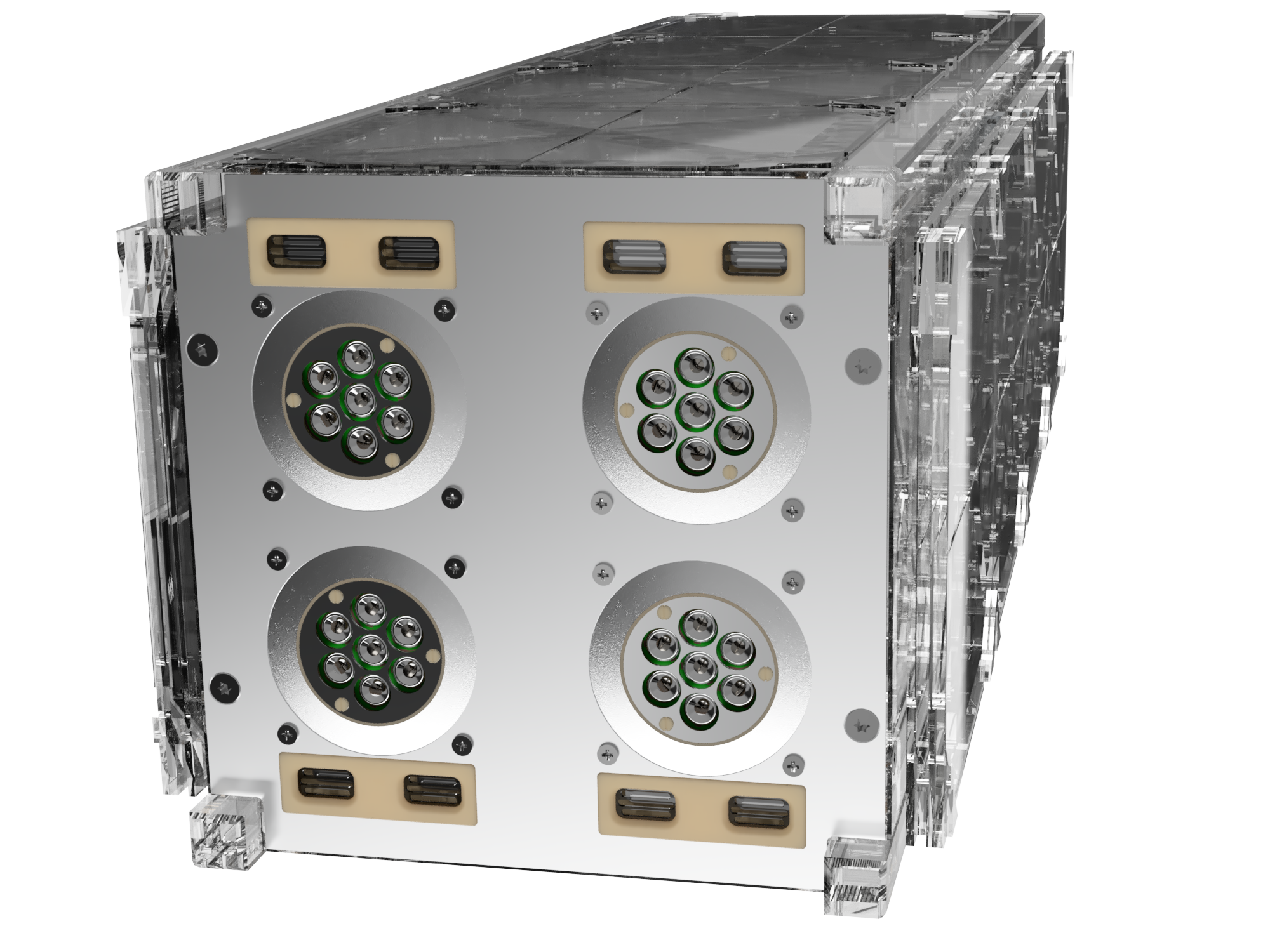 An example of a Morpheus multi-thruster array used in a 3U-sized small satellite.

Size is important, but so is scalability, and that’s another strength that the Morpheus thrusters bring to the market. Lőrincz told me that their technology allows you quickly and easily build a large batch of the thrusters, instead of having to tailor-make your propulsion system to fit the satellite, which provides big benefits in terms of manufacturing and design costs – which Morpheus can then pass on to its customers, opening up the possibility of including true orbital maneuvering capabilities to a whole new, much more price-sensitive segment of the market.

Next up for Morpheus Space, after it gets its hardware business fully up and running, is to develop and deploy software that complements its thrusters and can offer clients things like fully automated route planning and navigation, Bock told me.

“For example, you can imagine you just have to command ‘Okay I want to go from A to B,’ and everything is handled on board,” he said. So when and how you turn, all the routing. And the next step will be an automated way of handling whole constellations.”

It’s a big goal, but there’s a big potential pay-off. More and more companies are getting into the constellation game, including SpaceX and Amazon, and there’s a lot more to come on that front as companies build out new use cases for collecting and making use of data gathered from orbit. Orbital traffic management and collision avoidance is one reason big industry groups like the Space Safety Coalition are being formed, and anyone who can help supply players at all budget levels of the industry with a solution stands to benefit.

How Europes art world is welcoming back visitors

Coronavirus: How dangerous is lifting lockdown?

Olney: MLB is staring down a disaster that could last beyond 2020

The coronavirus has hastened the post-human era