The Cowboys’ offense has a new weapon.

Former Oklahoma star CeeDee Lamb dropped to the 17th pick in Thursday night’s NFL draft, and Dallas was there to snag him, giving QB Dak Prescott another talented wideout to join Amari Cooper and Michael Gallup.

A first-team All-American and a finalist for the Biletnikoff Award, Lamb was one of the nation’s most productive FBS receivers in 2019, catching 62 passes for 1,327 yards and 14 touchdowns. His yardage and receiving totals were both fifth best in the nation. 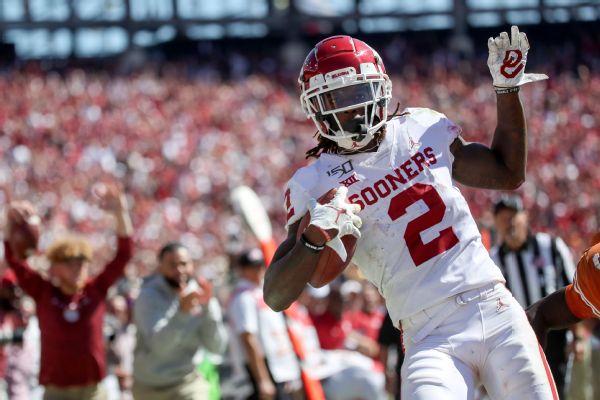 Lamb recorded at least 800 receiving yards in each of his three seasons with the Sooners, including more than 1,100 yards in his past two seasons.

Lamb also showed a knack for making defenders miss, forcing 31 missed tackles in 2019, the most by any FBS wide receiver, and his 11.1 yards after the catch also were the most of any receiver in the draft this season (minimum 50 catches).

Lamb is the fifth Oklahoma wide receiver to be drafted in the first round, joining Marquise Brown in 2019, Mark Clayton in 2005, Billy Brooks in 1976 and Eddie Hinton in 1969. For his career, his 32 receiving touchdowns and 3,292 receiving yards ranked second and third in Sooners history, respectively.