Editor’s note: This story was originally published ahead of Tatiana Suarez’s fight against Nina Ansaroff in March. Suarez defeated Ansaroff by unanimous decision.

RANCHO CUCAMONGA, Calif. — The worst two weeks of Tatiana Suarez‘s life took place in 2011, in a small bedroom she shared with her boyfriend at the time. She had just had surgery to remove a cancerous thyroid in her neck, and the room in which she was required to stay was covered with sheets of plastic. She was 20 years old.

As part of her treatment, Suarez took a dose of radiation iodine. Quick medical lesson: When iodine enters the human body, it is absorbed by the thyroid. So introducing a post-op patient to radiation iodine is an effective way to eliminate any residual cancer cells in that area. It also means, however, the patient will temporarily emit radiation — and should be isolated.

That’s an unwelcome predicament for anyone, but especially for a young, active woman who to that point in her life had dedicated nearly every waking minute to becoming the perfect athlete. Suarez, who faces Nina Ansaroff at UFC 238 on Saturday, laughs about it now — her two weeks in a plastic cell — but at the time, she would have done anything to get out of that room.

“They told me the faster it gets out of your system, you don’t have to be in that frickin’ secluded room anymore,” Suarez said. “So my idea was to flush it out as fast as possible. I remember drinking, like, two gallons of water. 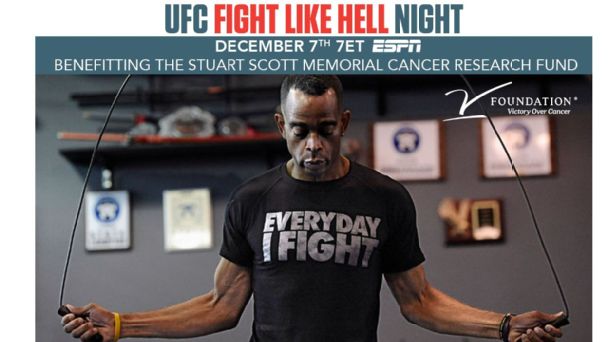 The event is part of Jimmy V Week from Dec. 3-14. Donate to the V Foundation for Cancer Research.

You can also donate to the Stuart Scott Memorial Fund.

“I went wild. I was exercising. My boyfriend was like, ‘What are you doing in there?’ He was in the other room. And I said, ‘I’m exercising, trying to get this radiation out of my body.’ I was doing wrestling drills, jumping jacks. I’m very impatient. That is one thing I do know about myself.”

This isn’t the only memory of having cancer at which Suarez now laughs. Believe it or not, she laughs at pretty much all of them. She’ll laugh as she tells you she is the first member of her family to have cancer, and how the only thing she really worried about was how she was going to break the news to her (far more anxious) mother.

Actually, Suarez did worry about one other thing. Right before she went into surgery, physicians informed her there was a very small chance she could lose her voice. And she did have a mini panic attack about that.

These carefree anecdotes aren’t the selective memories of a relieved survivor. Ask anyone who was there and they’ll tell you. Suarez doesn’t just laugh at cancer now. She did back then, too. As crazy as it sounds, battling that disease, it just wasn’t that big of a deal for her. She never feared it.

There is one thing in all of this that Suarez doesn’t find funny, and something changes in her face whenever it’s brought up. Because even though cancer didn’t take her life, or her voice for that matter, it didn’t walk away empty-handed.

Cancer took her dream of an Olympic gold medal.

“With Tatiana, she always had this fight in her that I was never afraid for her life,” says Lisa Padilla, Suarez’s mother. “Like, when she had cancer, I didn’t think that cancer was going to take her. I thought she was going to beat it, because that’s who she is.

“But I was really worried about her not being able to wrestle. It was a big part of who she was. Winning a gold medal had always been her dream. I don’t think she can remember a time in her life when it wasn’t. So, yeah, that was a difficult time for her. It was difficult for me. I was worried. Really worried.”

THE BEST TWO YEARS of Tatiana Suarez’s life took place in 2010 and 2011, right before her diagnosis. It was the time she spent at the Olympic Training Center in Colorado Springs, Colorado.

Those years represented the culmination of Suarez’s hard work as well as the platform to continue it. Suarez’s entire existence from the time she was 3 was centered on wrestling. She grew up wrestling boys because there was virtually no female competition for her to face. In high school, she spent her lunch hour running laps in an open field next to campus. She never attended a school dance and rarely saw her friends on the weekends.

“Tatiana was a generational wrestler,” says Bobby Bellamy, Suarez’s coach at Northview High School in Covina, California, with 20 years of experience. “She’s a four-time national champion. Her goals are so high. And if you watch the way she trains, that’s what separates her. She could have been an All-American in cross country if she wanted to. She’s just that driven.”

“I didn’t think it was going to be anything. I’m 19 years old. I’m healthy. All I do is train. How could this happen? Well, it ended up being cancer. So it happened.”

When she was 12, Suarez told her older brother, Chris Lopez, that she intended to win an Olympic medal. Lopez, who is seven years older, responded, “There’s no girl wrestling in the Olympics.”

“OK, cool,” Suarez replied. “I’ll be a men’s Olympic champion.” (As it turned out, women’s wrestling became an Olympic sport by the time she turned 14.)

Suarez attended one year of college but dropped out so she could live at the Olympic Training Center and compete internationally. She stayed in a dorm and trained every day. She would pass Michael Phelps in the dining hall and draw inspiration from the Paralympians there. The experience was everything she wanted, and it was all leading to the 2012 Summer Games.

But six months before the Olympic team trials, Suarez felt pain in her shoulder and neck, and had an MRI. Results showed a node on her thyroid.

“I didn’t think it was going to be anything,” Suarez says. “I’m 19 years old. I’m healthy. All I do is train. How could this happen? Well, it ended up being cancer. So it happened.”

The UFC is now on ESPN and ESPN+. Subscribe to ESPN+ to get: exclusive live UFC events, weigh-ins and more; Ariel and the Bad Guy; Dana White’s Contender Series; and more exclusive MMA content.

Suarez would end up beating cancer over the next 18 months. And to this day, her mother credits the injuries to her neck and shoulder for saving her life. There’s no telling how far the cancer might have spread had Suarez not gone in for that MRI.

But that summer of 2012, she did not fly to London for the Summer Games as she always had expected she would. She watched the women’s final from home in California.

“That was hard. It was really hard,” Suarez said. “I wouldn’t even say I watched it that closely, because it was too hard.”

Life inevitably began to move on after that. Suarez accepted a job at PetSmart. She took up an interest in training dogs, but her family and friends noticed a significant change in her. Mainly, she wasn’t happy. The only life she’d ever known was built around reaching a single athletic achievement. Her new life felt foreign, as if it belonged to someone else.

“We had a conversation one time, about what she was doing after wrestling,” Lopez says. “And she kind of — I don’t think she meant to make me feel a little less than myself — but she was like, ‘Man, I have a regular job. I’m like this … normal person.’ And I was like, ‘Dude, I have to go to work. I’m a normal person.’

“And she goes, ‘Yeah, but that’s just not who I am.’ And you could sense she wasn’t really happy, you know? She didn’t want to be like us normal people.”

SUAREZ DOESN’T REMEMBER exactly when someone first called her “Female Khabib.” She wants to say it was late 2017, which would have been just three years into her MMA career.

The UFC will return on Saturday, with an up-and-coming heavyweight looking to knock off an established veteran in the main event. Jairzinho Rozenstruik, who is 9-0 and opened eyes with his first-round KO win over Andrei Arlovski at UFC 244, will face the toughest challenge of his career in Alistair Overeem. “The Demolition Man” is 45-17 and has earned two straight first-round TKO wins.

The implications of the nickname, which picks up momentum every time Suarez fights, are obvious to any fight fan. Suarez has made a habit of “Khabib-ing” her opposition. She’s dominating them with wrestling, similar to undefeated lightweight king Khabib Nurmagomedov. Her style is smothering and demoralizing. Humiliating, even.

Suarez’s transition into MMA happened a bit unexpectedly. In 2013, after more than a year of being cancer-free, she accepted an offer to try jiu-jitsu at a nearby gym. Within a handful of sessions, the competitor in Suarez resurfaced. She confidently announced she would become a world champion black belt.

Her instructors suggested something else.

“They were like, ‘No, no, no, you’re destined for greatness. You’re gonna be more than that,'” Suarez says. “And I was like, ‘Really? What am I gonna be?’

Over the past six years, Suarez has established herself as the elephant in the room of the UFC’s 115-pound division. She signed with the promotion after winning the 23rd season of “The Ultimate Fighter” reality TV series, and since then she has finished three of the four opponents she has fought. As Suarez heads into her fifth UFC bout this weekend, many consider her the future queen of the weight class.

At her core, Suarez is still a wrestler, and she’ll probably always have a hole in her heart the size of an Olympic medal. Did she ever consider trying out for the 2016 Olympics? No, she never did. Because once she tried MMA, she was all-in. That’s the only approach she’s capable of having. The same intensity that drove her to be an elite wrestler actually prevented her from returning to the sport.

She’d found something else.

At the 2016 Summer Games in Rio de Janeiro, Helen Maroulis became the first American to win gold in women’s freestyle wrestling. Suarez watched the final from California, just as she’d done in 2012. She recognized the winner on her television. Suarez had beaten Maroulis at the World Team Trials in 2010.

“That was kind of like, ‘Aw, man.’ You know?” Suarez says. “But then I was just happy, because there was finally a woman from the U.S. that won a gold medal. That was something that hadn’t been done. So I was just really happy about that at the time.”

Suarez is 28 years old and potentially just one win away from securing a UFC title shot. A shot at athletic gold. It’s not the gold she dreamed of as a kid, but will it suffice?

“I think missing the Olympics will always be part of her, a part of something she lost,” Suarez’s mother says. “But I think she also understands that losing that saved her life and allowed her to find a new sport that she loves.

The Sonos Arc is an outstanding soundbar, on its own or with friends

UFC 250 — How hard does Amanda Nunes hit? You see stars and birds