OWINGS MILLS, Md. — After setting the NFL’s single-season rushing record in 2019, the Baltimore Ravens used a second-round pick in the 2020 NFL draft on Ohio State running back J.K. Dobbins.

General manager Eric DeCosta said he thought Dobbins would be taken in the bottom of the first round, between picks Nos. 25 and 30, and had a chance to be the first running back drafted. Instead, the runner who set Ohio State’s single-season rushing record was sitting there at the No. 55 pick, the selection Baltimore received from Atlanta in the trade of tight end Hayden Hurst.

“We didn’t really expect [Dobbins to be available there], I don’t think anybody really did,” DeCosta said. “But we just had to take him. He’s just a talented guy. It just made too much sense for us not to take him.”

With NFL MVP Lamar Jackson leading the way, Baltimore set a new league mark last season with 3,296 yards rushing. The Ravens also became the second team in NFL history with three 700-yard rushers (the 2011 Carolina Panthers were the other). All of those players (Jackson and running backs Mark Ingram II and Gus Edwards) remain with Baltimore.

But Ingram turned 30 in December and backup Edwards is a free agent next offseason. When Ingram was injured late in the season, Baltimore struggled to run the ball in a playoff loss to the Tennessee Titans, getting 42 rushing yards from its running backs.

That led the Ravens to draft their first running back in the first two rounds since Ray Rice in 2008, which certainly caught Dobbins off guard because of Baltimore’s depth at the position. 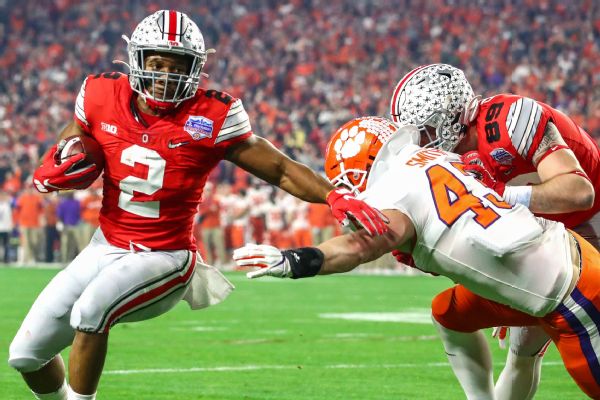 “I honestly didn’t know that I was going to receive a call from Baltimore, but God works in mysterious ways, and here I am today,” Dobbins said. “I feel like I’ll thrive in this offense.”

Dobbins ran for 2,003 yards in 2019, the most in Ohio State history. He is one of four running backs with 1,000 yards rushing in each of the past three seasons (Zack Moss, Jonathan Taylor and AJ Dillon are the others).

Even though Dobbins was available, the Ravens could’ve easily addressed more pressing needs at wide receiver, the interior of the offensive line or the pass rush. But DeCosta learned from former GM Ozzie Newsome that great players will unexpectedly plummet and you have to be prepared to take them.

So the Ravens made the decision to grab Dobbins, who watched four other running backs get drafted before him.

“We’re a team that likes to run the football. Having running backs is really, really important,” DeCosta said. “This was a guy that’s, in my opinion, one of the very best in college football this year. He’s going to be a dangerous player for us and give us the depth to do what we like to do.”