METAIRIE, La. — Drew Brees has never intentionally gone back to watch the replay of the no-call.

Yet the New Orleans Saints quarterback still estimates he has seen it “a hundred” times — a number he is sure will go up by the time the Saints and Los Angeles Rams kick off their rematch in L.A. on Sunday (4:25 p.m. ET, Fox).

“It could be just sitting in the lunchroom and looking up. … I’m sure this week alone it might be up there 10 times,” Brees said of the missed pass-interference call in last year’s NFC Championship Game that could have played a part in keeping New Orleans out of the Super Bowl and inspired a groundbreaking NFL rule change.

“I’ve probably seen it 40 times,” left tackle Terron Armstead said. “Every time I see it, it’s tough. I’m definitely not looking for it. I’m not seeking it out.”

“Man, at least a hundred times,” Saints safety Vonn Bell said. “Especially since they changed the [replay rules], saying you could challenge it — they always show that play. I’m like, ‘Man, you couldn’t have found another call?'”

Running back Alvin Kamara couldn’t put a specific number on it — just an expletive, followed by “a lot.”

The Saints have insisted all offseason they aren’t consumed by the gut-wrenching way their 2018 season ended.

And they backed up their words Monday night by showing the resilience to rally from a 14-3 halftime deficit against the Houston Texans — despite another egregious officiating error in the final minute of the first half.

If New Orleans’ devastating playoff exit was supposed to create some sort of unavoidable hangover effect, well, we haven’t seen it yet.

Heck, maybe it helped. The Saints are actually 1-0 for the first time in six years.

But “moving on” is much easier than actually avoiding any mention of what might be the most infamous officiating gaffe in NFL history. 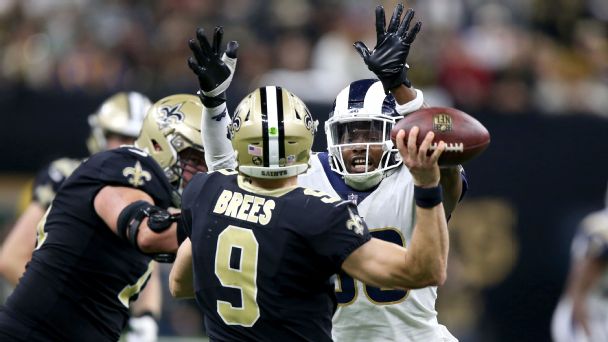 Not only did it lead to a colossal change in the league’s replay rules — spearheaded by Saints coach Sean Payton — it also led to a flood of frivolous lawsuits against the NFL (the last one was dismissed last week in the Louisiana Supreme Court). The fan reaction was also unprecedented, including a citywide boycott of the Super Bowl. Throwing yellow penalty flags along with beads might now become an annual tradition in Mardi Gras parades.

And more than anything, even if the Saints bounce back to win a Super Bowl this year, there will always be a little emptiness that lingers for the one that got away.

When asked this week how long it took him to forget what happened, Brees replied: “Still haven’t. Never will.”

“But when you say forget about it, you have to find a way to compartmentalize it to the point where you can move on in a positive way. And I’ve found a way to do that,” Brees said. “But as far as the events, you live and learn, and sometimes things don’t go your way. And you gotta find a way to come out better on the other side.”

The Saints will get the ultimate chance to prove they can on Sunday.

Payton and players have insisted that they don’t consider this a “revenge match.” So a win might not exactly provide closure. But it would at least put an end to any hangover concerns.

Even more importantly, it would give the Saints a leg up on another team they should be battling for playoff seeding at the end of the regular season.

“It’s easier than you would expect,” Payton said of shutting down the revenge narrative. “It’s a different year; it’s a different team. It’s Week 2 in the regular season. I think, look, the importance of the game or the relevance of the game is that you have two real good playoff teams playing each other from a year ago. And so I think that’s why it’s a national TV game. That’s what I see.”

Payton is never afraid to address the elephant in the room when it comes to such story-of-the-week narratives. He has famously filled the locker room with mousetraps and handed cheese out to his players to inspire them to avoid trap games. He mockingly switched their travel sweatsuits and the color of their Gatorade before their first road playoff win in franchise history during the 2010 season. Just last week, he openly talked to players about how the team hadn’t won a season opener since 2013 – even changing the weekly schedule to mix things up.

But this week, Payton’s message to the team has been to treat this like any other big game in any other Week 2.

Player after player has repeated the same mantra this week: “It’s the most important game of the season because it’s the next game.”

“I don’t think [Payton has to use it as motivation],” Armstead said. “Even last week, the fact that we hadn’t won a season opener, even without him saying that we still wanted to win the first game. And even regardless of what happened last year, Rams Week 2, we want to beat ’em.”

The message was similar in Los Angeles, where cornerback Aqib Talib said, “That’s a New Orleans problem. It’s not an L.A. problem.”

Brees compared this week to the Saints’ triumphant return to Minnesota in Week 8 last year — the site of their devastating “Minneapolis Miracle” loss in the playoffs the season before.

“They scheduled it on Sunday Night Football, they’re gonna make a big deal out of us going back to Minneapolis. And I can tell you it’s the last thing anybody was talking about around here,” Brees said. “That was just another big game against a really good opponent where we gotta go and get a W on the road. And so we were able to do that.

“Maybe there were a lot of storylines leading up to it, I don’t know. I wasn’t reading them. Afterward, I’m sure it was all quiet. Maybe that’s the same way after this game.