The first time he entered free agency, former NFL linebacker Bart Scott wasn’t afraid to make a tough call. He had survived a rough Detroit neighborhood. He prided himself on playing through pain, having endured Michigan winters and playing on dirt fields. And he arrived in the NFL as an undrafted free agent — from a school that flew a chartered UPS plane to games.

“It had no windows,” Scott said, “We landed and I was asleep and I thought we were f—ing crashing.”

Not much fazed him. He, and other former NFL players, understand the decisions many current players must make once free agency begins Wednesday. Money is a motivator, but there are other factors players consider as well.

Here’s a look at different perspectives from three prominent former players as they were about to hit free agency for the first time: Scott, running back Fred Taylor — both were Pro Bowlers — and defensive lineman Ziggy Hood — the Pittsburgh Steelers’ first-round pick in 2009.

Scott was at the Cleveland Browns’ facility in the spring of 2006, considering an offer that was his most lucrative in free agency. As a 25-year-old who went undrafted out of Southern Illinois, there was good reason to snatch every dollar.

But during that visit, the Baltimore Ravens called and offered two fewer years and about $12 million less. For Scott, it was a no-brainer: Take Baltimore’s offer.

Here’s why: Scott had spent his first four seasons as a special-teamer and backup to Ray Lewis with the Ravens. But in 2005 — his fourth season — Scott started 10 games while Lewis was hurt. Scott played well enough to warrant a five-year deal worth $25 million from Cleveland, and Baltimore countered with a three-year deal for about $13 million.

“If I’m able to garner this amount [on an offer] at that time, what happens if I get a full year and an opportunity to show what I can do?” he said. “It was me betting on myself and taking a shorter deal to show what I could do.

“Why lock myself down until I’m 30 and sign a deal under market [value] when I know it will change?”

Baltimore’s deal would allow Scott to hit free agency again as he entered his prime. His first season as a full-time starter in Baltimore (this time next to Lewis) worked out perfectly: Scott finished with a career-high 135 tackles, 9.5 sacks, two interceptions and nine passes defensed.

Two years later, he wanted to cash in on free agency but also consider life after football. When his defensive coordinator in Baltimore, Rex Ryan, became the New York Jets’ coach, Scott knew where he wanted to go. He signed a six-year deal worth $48 million; Scott said Baltimore made him an identical offer.

“I wanted to be in a place I could make a transition off the field,” he said. “I knew New York had never seen such brash bravado from the Jets. I knew they’d be attracted to the in-your-face, unapologetic, tough, physical, braggadocio mentality me and Rex would bring.”

Scott said that sort of attitude helped him post-NFL. After he retired from the Jets following the 2012 season, he spent five years working for CBS Sports and currently has a radio show on ESPN New York with Alan Hahn.

“You think it’s a coincidence that half the [ex-players] in media are from New York? It’s not an accident,” he said. “It helped brand me on the big stage. ‘OK, we’ll take the loudmouth’ because we had success. We didn’t call ourselves the Dream Team and get our asses kicked. People might say we talked s—, but guess what — we were damn fun to watch.”

When Hood entered free agency, he had one goal for himself and another for his family. After playing five years in Pittsburgh’s 3-4 scheme, he wanted a change. But that change meant taking his autistic son out of a good situation. So Hood also needed to make sure Josiah, 4, would be well taken care of no matter where he signed.

Hood had his agent, Andy Ross, not only prepare a report on every team but a medical report for each city. Hood’s wife, Sara, did her own research as well. Money would be a deciding factor, of course. And the extra money could help them procure good services for their son while also raising another son, Jeremiah. The Hoods needed 17 doctors and six therapists for Josiah in Jacksonville, where Hood eventually signed.

“I couldn’t just be selfish,” Hood said. “I had to grow up faster than some guys who were single. I have a child with special needs. It was the combination of family life and trying to fit what’s best for them and what will also prolong my career as well.”

That last part included playing in a different system. Pittsburgh drafted Hood in the first round in 2009, switching him from a defensive tackle in a 4-3 to an end in a 3-4. Scheme didn’t matter to Hood.

“You’re playing for the Pittsburgh Steelers,” he said. “Who doesn’t want to play for an organization like that? I wish I had adjusted a lot better.”

Hood’s Steelers career was inconsistent. He recorded 11.5 sacks in five years with the Steelers, but the system wasn’t designed for him to produce big numbers. He played some nose tackle.

“Being in coach [Dick] LeBeau’s system, defensive linemen don’t get an opportunity to shine like they could,” Hood said. “It takes a hell of a season for that to happen.”

Hence, a desire to play in a 4-3. Tampa Bay, Kansas City and New England also pursued him. But that’s where it also came down to money: the Jaguars topped those offers by one year and $5 million. The fact that Florida has no state income tax and nice weather sealed the deal.

Hood’s stint in Jacksonville didn’t work out; he recorded one sack in his first season and then plantar fasciitis landed him on injured reserve in his second season, leading to his release. He played two years for the Redskins as an end and nose tackle in a 3-4 scheme. Knowing what he does now, he wouldn’t dismiss a scheme, because each is played differently.

And his advice to players going through free agency for the first time: “Whenever they throw money at a young guy, you tend to jump a little bit. … My biggest thing for a guy coming out for their first free agency is to take your time and make sure that you’re fully comfortable and aware of everything, whether it’s what your family wants, or the system or if you like the city.”

After 11 years with the Jacksonville Jaguars, never tasting free agency, Taylor had no choice but to find a new home. The Jaguars had cut their all-time leading rusher. But other teams quickly showed interest. Buffalo wanted him. So did Cincinnati.

However, Buffalo had posted four consecutive losing seasons and the Bengals were on a three-year sub-.500 streak. 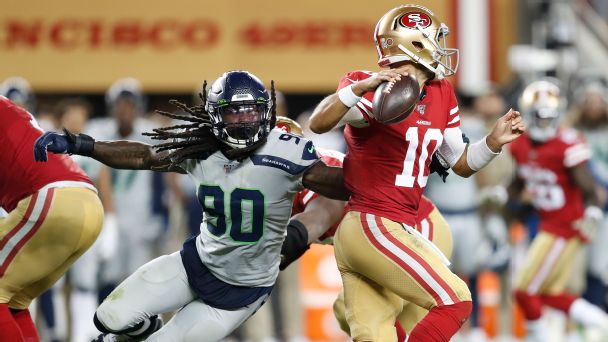 • Free agency not just about chasing cash
• What can Vikes afford to do on defense?
• Fins have money but will be judicious
• Colts not likely to be big spenders
• Predictions for every team’s top free agent

Taylor wasn’t initially focused on championships. His main desire was to surpass Jim Brown on the all-time rushing list. Then the New England Patriots entered. They were a year removed from an undefeated regular season and had gone a combined 49-15 over the previous four years.

“When you bring New England into the mix, my mind shifted to, ‘I want to win a ring,'” he said, “and there’s no better place to go than New England. It was a no-brainer. I knew there wasn’t going to be a ton of money out there for a 33-year-old running back.”

He called the Bills’ offer a joke, but the Bengals might have offered more had he visited — as his agent suggested. Instead, Taylor told Patriots coach Bill Belichick on his visit that he wanted to sign. He negotiated his own deal — two years, $5 million.

Taylor didn’t get his ring, though the Patriots went a combined 24-8 in his two seasons. He missed a combined 19 games because of a high ankle sprain and two turf toe injuries. Nor did he pass Brown. But Taylor, 17th on the all-time rushing list, didn’t regret the move. He had spent his entire career in one state, as a running back for the University of Florida and then with the Jaguars.

“I was able to appreciate that New England region and the rich sports tradition,” he said. “It was amazing how each of those teams took care of each other — Celtics tickets; batting practice with the Red Sox; behind the glass with the Bruins. There was so much love for each other and the fans eat it up.”

Taylor stayed long enough to learn why the Patriots had been so successful. When he delivers talks to groups, he often mentions Belichick and his philosophy.

“You’ve got to handle your business,” Taylor said. “Move with a sense of urgency and commitment and dedication and understand your job and your job only and get it done.”

Taylor didn’t test free agency until late in his career but didn’t regret that move, either. Previously, he always re-signed with a year left on his contract. He admitted that suffering several injuries early in his career might have affected those decisions.

However, if he had tested free agency earlier, then “now I’m not a [Jaguars] legacy member. I wouldn’t be in the Ring of Honor and my name wouldn’t be exclusive to a ballclub. New England fans remember the cup of coffee I had; other than that, people know I’m a Jaguar. … That helps in your post-career in terms of fan identification and brand identification.”