Dwayne “The Rock” Johnson’s first WWE appearance in more than three years. Brock Lesnar’s first match on WWE TV in more than 15 years. Pro wrestling on TNT for the first time in more than 20 years.

Those three moments only begin to describe the wild and chaotic week in the world of pro wrestling. In addition to SmackDown’s debut on Fox, the debut of newcomer All Elite Wrestling’s Wednesday Night Dynamite, NXT settling into its official live two-hour slot on USA Network and Raw’s star-studded “season debut,” it’s no wonder that preparation for Hell in a Cell has taken a back seat.

That’s before you even consider the WWE talent draft that kicks off on Oct. 11.

But make no mistake about it, what happens at Hell in a Cell and the fallout from that night will go a long way toward shaping how the early days of this new era in wrestling play out. Before we get into Sunday night’s Hell in a Cell card and how much it means to “The Fiend” Bray Wyatt, let’s dig deeper into this week.

Monday Night Raw was pure chaos and confusion, a fever dream of a narrative packed around solid matches that meandered in strange and often confusing directions.

Rusev’s evening personified that more than anyone. After ostensibly entering the night with a villainous slant, he saved WWE Universal champion Seth Rollins from a two-on-one attack by Baron Corbin and Randy Orton, and assumed a spot on “Team Hogan” against “Team Flair” for the upcoming return of the Crown Jewel in Saudi Arabia on Oct. 31. He even did the famous Hogan “pose-down” with Rollins and his team captain.

Within one commercial break, Rusev was back to his heelish ways, challenging Rollins for a Universal championship match. Then, during the main event — one of the biggest matches in an extremely long time — Rusev stood in the ring and watched Bobby Lashley make his return after months out of action by bringing out Rusev’s wife, Lana, and kissing her. What’s even more implausible is that Rusev himself was alleged to have been the father of Maria Kanellis’ baby in an entirely separate infidelity storyline last week.

Then, The Fiend appeared at ringside while everyone’s attentions were elsewhere, attacked Rollins and sent Raw off to Sunday’s event. 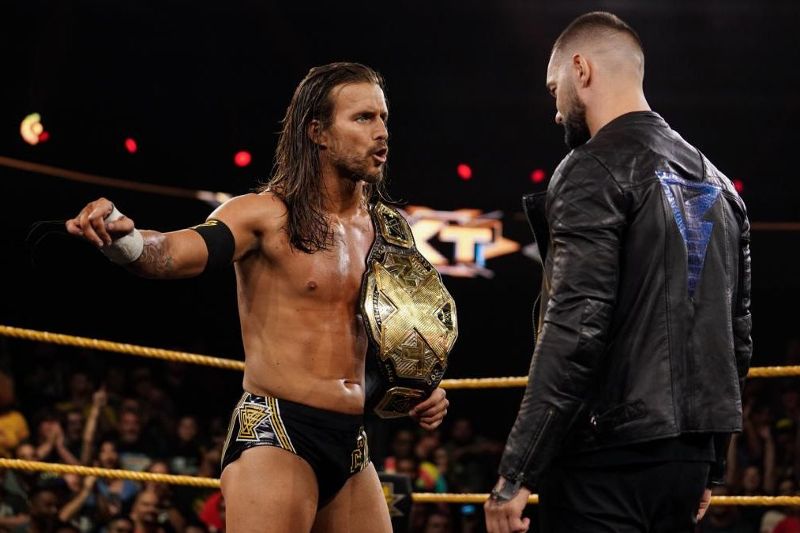 On Wednesday night, going head-to-head with AEW for the first time, NXT offered three electric title matches and the returns of both Finn Balor and Tommaso Ciampa — the latter returning from an eight-month hiatus following major neck surgery. Both former NXT champions went face-to-face with reigning champ Adam Cole, laying the groundwork for exciting times ahead in the NXT championship picture.

The shocking storylines were even more stark against the backdrop of how good the wrestling was inside the ring. Cedric Alexander’s second unsuccessful attempt at AJ Styles was stunning, Cesaro wrestled a great match against Ricochet, despite being in street clothes,. The OC vs. Viking Raiders rematch was just as good as the first, Sasha Banks vs. Alexa Bliss was a good sendoff to Banks’ Hell in a Cell match, and Heavy Machinery stepped up in a big way despite falling short in their Raw tag team title challenge against Robert Roode and Dolph Ziggler.

But the week has all led up to Friday and WWE’s long-awaited SmackDown debut on Fox, its first weekly show on major broadcast TV. There’s a staggering amount of star power dedicated to one show. While it’s crazy to think that we’re only two days out from a pay-per-view and only three matches have been announced, the immense uncertainty centers around how much hangs in the balance Friday night.

As we wait to see if Lesnar walks out of Los Angeles as the new WWE champion, we can say one thing with authority: with apologies to Becky Lynch, and what could be a show-stealing match against Sasha Banks, the WWE’s most exciting and engaging act of 2019 faces a crossroads on Sunday night.

Back in April, few would’ve believed it would be possible for Wyatt to elevate himself back into the top tier of WWE performers. Sure, he’s a former WWE champion who has had memorable rivalries with Orton, The Undertaker, John Cena and, as the lead of the Wyatt Family, his faction feuded extensively with The Shield and The New Day.

But there’s a common thread carrying through each of those moments: Wyatt ultimately played the fool in the end.

Against all odds, in a WWE world that doesn’t often have patience for character reinvention, Wyatt has been able to reinvent himself and thrive time and time again. He’s gone from Husky Harris, a poorly named also-ran in later iterations of the Nexus, to the leader of a bayou cult of giants, to a fallen prophet.

When his last run fizzled out, Wyatt walked away for a long stretch and came back as a man broken in two: half saccharine-sweet Mr. Rogers facsimile with a psychotic edge, and half demonic personification of all Wyatt’s most monstrous desires. When the first Firefly Funhouse aired in April, the audience bought in, and upon The Fiend’s first appearance in July, support reached a fever pitch.

Wyatt picked off legend after legend as the crowd cheered along, but as with any white hot introduction, WWE couldn’t afford to have Wyatt hit the same note too often and stand in place. They could’ve taken the slow approach, watching Wyatt slowly pick his spots until reaching the top, but instead went for the highest impact just a few months into Wyatt’s new run: Rollins and the Universal championship.

From a crowd reaction perspective, it makes sense. From a timing and setting perspective it makes sense too, as Hell in a Cell and the month of October feel like optimal times to make Wyatt the centerpiece of the WWE ecosystem. Finally, the pressure of making a big splash at the start of a major new era for the company requires taking risks and putting out the biggest matches you could make. Putting Wyatt in a Universal championship match keeps fans fully invested in the week-to-week goings on in WWE.

The same core reasons why having Wyatt challenge Rollins is so fascinating are the same principles that make it a high-risk proposition. If you decide to strap a rocket on a rising star, you risk straining credibility and making the rest of your roster look like chumps. But setting that same star up to lose comes with dire consequences as well.

If Rollins walks out of Hell in a Cell having vanquished Wyatt, the mystique will likely fade in a hurry. Right or wrong, fans will harbor a grudge against both Rollins and WWE in general for short-circuiting Wyatt’s run to the top and making him just another monster of the month for the company’s top star to vanquish. As we’ve seen clearly in the cases of Cena and Roman Reigns over the last decade, it could easily shift fan opinion and reactions to Rollins.

While he’s seemingly been written off a half-dozen times and fought his way back before, another detour could be the death knell for Wyatt as a major player and a title contender. Rollins’ title reign, including his brief slip-up against Lesnar, hasn’t quite lived up to expectations. WWE has taken a risk in setting up Sunday’s match so soon into Wyatt’s ascent. So why not go all the way, and make Wyatt’s unpredictability and chaos the engine that drives Raw and SmackDown through the rest of 2019 and into WrestleMania season?

For 20 minutes at Clash of Champions, Becky Lynch and Sasha Banks proved they are two of the best the WWE’s women’s division has to offer. An unsatisfying ending to that match, another month of building tensions have done nothing to stifle the excitement surrounding a rematch. Placing the match inside Hell in a Cell only raises the stakes.

Banks and Charlotte Flair set a high bar for what can be done inside Hell in a Cell, and both Lynch and Banks have proven that they are willing to go to almost any lengths to prove what they are capable of inside the ring. This match will be violent, it will be ugly, and it should be a legacy-building moment for both women. With the forthcoming draft looming, this match could go either way — and Banks beating Lynch would be a major feather in her cap.

How do you get revenge for attempted murder in WWE? A tag team match, of course.

The ongoing saga between Erick Rowan and Reigns has steered drastically away from Rowan’s two attempts on Reigns’ life, including a head-on car crash, and into elevating Rowan as a dynamic performer. The feud has brought the return of Luke Harper, the evolution of Daniel Bryan (into a more sympathetic character), and a tenuous tag team bond between Reigns and Bryan that will take on a pair of WWE’s most physical performers on Sunday.

Could it end with Bryan somehow still being the mastermind, nullifying weeks of progress? Sure. Will Reigns lose two pay-per-view matches in a row to Rowan? Unlikely. How this story plays out on Sunday is anyone’s guess.