Houston, we have a Westbrook … now what?

Following the initial shock of the Russell Westbrook trade to the Houston Rockets, there were three immediate questions about the superstar on the court:

Let’s try to answer those questions after nine Westbrook games — he has missed one matchup during Houston’s 7-3 start — with the necessary caveat that it’s still early.

Can Westbrook shoot well enough to play in this system?

Short answer: yes. There’s no question he’s a downgrade from Chris Paul as a shooter, and that’s going to hurt. Still, Westbrook is launching 17.9 shots per game and Houston has the third-best offense in the league.

But so far the offense is working in spite of Russ’ jumper. From a pure shooting perspective, we have a decade of evidence revealing who Westbrook is at this point — a high-usage, low-efficiency gunner: 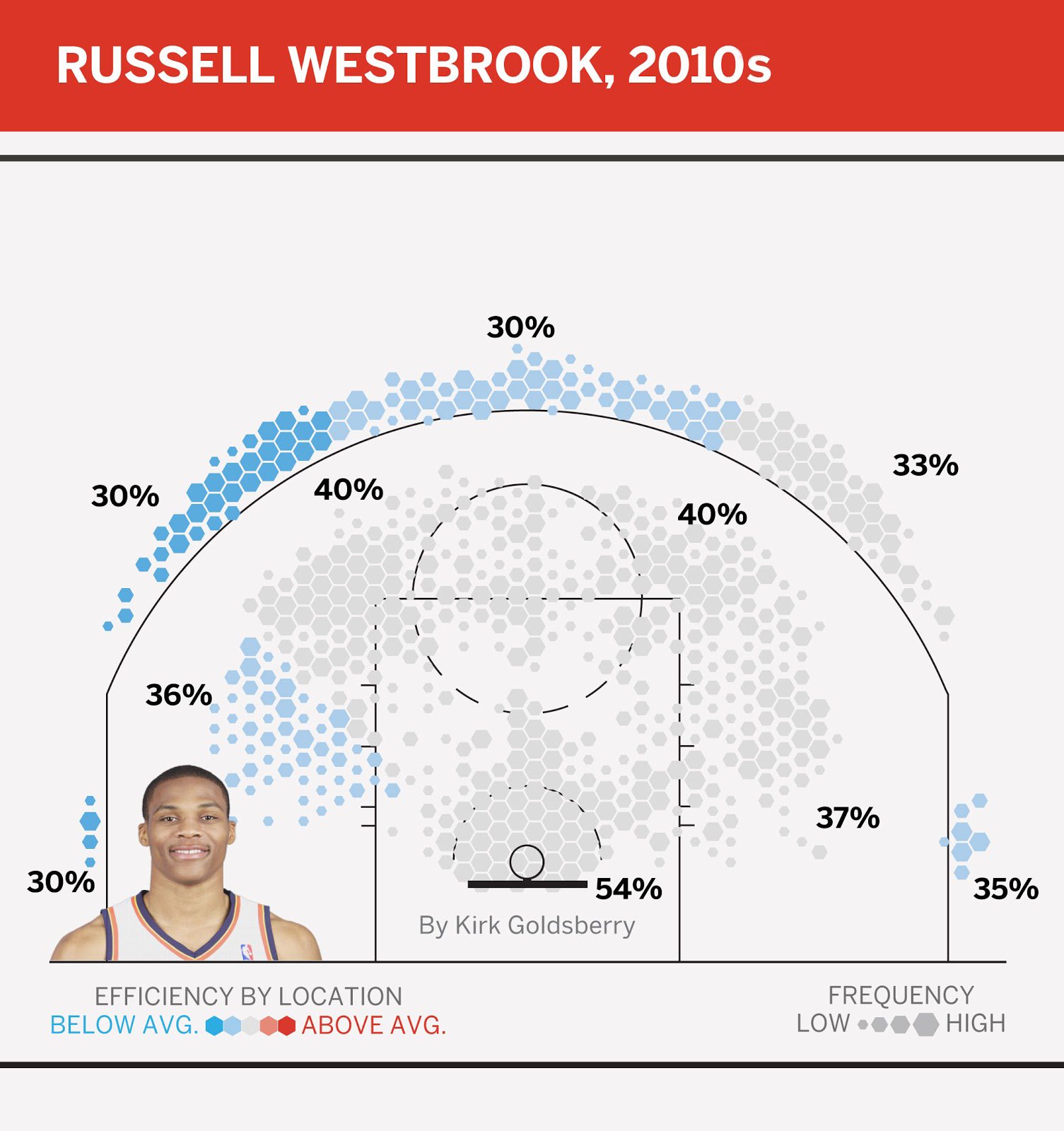 His jump-shooting numbers have been bad all decade. They’re not any better in Houston. Per Second Spectrum tracking, out of 56 players to attempt at least 65 shots outside of the paint this season, Westbrook ranks last in effective field goal percentage (eFG%) at 31.1%. Yikes!

Efficiency is a sacred utterance in H-town. And dumping Westbrook’s shooting tendencies into Daryl Morey’s analytical blueprint is akin to emptying a sack of raccoons into a yoga class. It’s going to disrupt the mantras, folks.

In each of Mike D’Antoni’s three years as head coach, Houston has ranked in the top three in shooting efficiency in part because of the Rockets’ unmatched devotion to smart shot selection. Westbrook does not share that devotion. Through Houston’s first nine games, he has taken more non-paint 2s than the rest of the team combined.

Westbrook’s presence was bound to reduce the team’s overall shooting numbers. Check this out:

As of today, the Rockets rank eighth in eFG% at 53.3%, which is just fine, especially considering that Harden and Eric Gordon have actually been less efficient shooters than Russ so far. Once those guys warm up, the Rockets’ overall shooting numbers will be strong once again — just maybe not as strong as they were in the CP3 era.

Can Westbrook and Harden coexist on offense?

Offense is a lot more than just shooting. The other things Westbrook brings to the table — things like his passing, his frenetic spark and his explosive transition abilities — are fundamentally changing the ways the Rockets play offense, and so far the chemistry between these two old friends looks pretty good.

If you want to understand how Westbrook is changing the Rockets, just look at their pace and transition numbers.

No other guard in the NBA is nastier on the fast break than Westbrook, whose speed, energy and stamina remain world-class even as he approaches age 31. To analyze Westbrook’s true impact on offense, you have to look past his mediocre shooting numbers.

Before landing in Houston, Westbrook had become the NBA’s most prolific shot creator. Over the past three seasons, Harden ranked second in the NBA in assist opportunities created, averaging 17.1. Westbrook ranked first with 21.0, far and away the most in the league, per Second Spectrum.

However, these fellas achieved these massive numbers in separate basketball ecosystems. One big question coming into the year: What would happen with they became co-pilots?

Everything looks pretty smooth so far. Westbrook is generating 17.1 potential assists (fourth in the league) and Harden is at 16.0 (sixth). And out of the 79 players with at least 50 assist opportunities this season, Harden’s passes are generating the second-best shot quality with a 61.9 expected eFG%. Westbrook ranks No. 19, according to Second Spectrum data. That’s encouraging stuff.

So, both are still creating a bunch of looks for their teammates, but Westbrook has become the leading shot creator. In a vacuum, this is a stunning development. But it also serves as a reminder that those seeking to reduce Westbrook’s entire game to high-usage, low-efficiency chucking are doing it wrong. The passing numbers don’t lie; he’s a great catalyst.

If Westbrook can tame his shot selection and realize he’s more Ben Simmons than Stephen Curry, the Harden-Westbrook pairing will be just fine.

Does Westbrook make the Rockets better?

Context here is important. The Rockets have been a really good team ever since D’Antoni showed up. They’ve averaged more than 57 wins per season. They were one nightmarish shooting night away from upending the Warriors in the 2018 Western Conference finals.

So this particular question is tricky, and its answer depends on just how untenable the reported strain between Harden and Paul had become. Chemistry is important, and the justification of the Paul-Westbrook swap could rest more on human relations than it does on analytics. By exchanging Paul for Westbrook, the Rockets flipped an untenable superstar marriage in favor of a tenable one.

Regardless, this team isn’t great overall right now, especially with Westbrook on the floor. Look at this:

Compare those marks to the man whom he’s replacing:

This early in the season, it’s hard to find reasons to suggest the Westbrook-era Rockets will be better than the Paul-era Rockets (when healthy). In the minutes that Harden has sat and Westbrook has played, the Rockets have a putrid net rating, largely thanks to atrocious defensive numbers.

In each of the three previous seasons, the team paired a great offense with a decent defense and ended up in the top five of net rating. So far this season, the defense is poor enough that Houston is struggling to outscore opponents.

Therefore Westbrook optimists must lean on the hope that this team will get better with time, and to be fair, that’s distinctly possible. Just look at last year’s team for precedent. In 2018-19, the Rockets ranked 25th in defensive efficiency before the All-Star break. Then they flipped the switch, ranking second in that category after the break. This year’s group has the talent and the time to make the defensive improvements necessary to become legitimate contenders. But will they?

It’s too early to conclude too much about this squad, but it’s not too soon to say that for this Westbrook experiment to succeed, the team’s key markers with him on the floor — especially on defense — must improve between now and the playoffs.