The Jacksonville Jaguars have picked their share of busts in the first round of the NFL draft in recent history, but they certainly didn’t in 2016 when they selected Jalen Ramsey out of Florida State with the fifth overall pick. He quickly blossomed into an elite cornerback and was a key member of a Jaguars team that came within a controversial call of making the Super Bowl after the 2017 season.

Ramsey’s stellar play also comes with brash confidence, and his tenure in Jacksonville has also featured ejections, arguments and other distractions. The latest, a confrontation on the sideline with head coach Doug Marrone during the Jaguars’ loss to Houston in Week 2, led to his agent asking for a trade.

A timeline of Ramsey’s time with the Jaguars:

April 28, 2016: The Jaguars select Ramsey one pick after the Dallas Cowboys select running back Ezekiel Elliott.

May 24, 2016: Ramsey undergoes surgery to repair a torn meniscus in his right knee. He suffered the injury during conditioning drills. He is cleared in time for the beginning of training camp.

Oct. 17, 2016: After struggling to contain receiver Alshon Jeffery in the first half against the Bears (six catches for 90 yards), Ramsey holds Jeffery to one catch for 3 yards on six targets in the second half. He also knocks down Brian Hoyer‘s fourth-down pass to Jeffery to seal the Jaguars’ 17-16 victory.

Sept. 25, 2016: Ramsey’s brash personality goes on display for the first time when he calls Baltimore Ravens receiver Steve Smith an old man and said he had no respect for him as a man after the two got into an exchange on the field after the Ravens’ 19-17 victory.

“Ain’t nobody worried about him. He came up to me, you know what I’m saying, on some disrespectful stuff. The game’s over with. You still mad ’cause I was locking you up? All right, go sleep on that. I ain’t trying to hear that after the game.”

A few hours after the game, Smith ripped Ramsey on Twitter: “In 5 to 10 u will be retiring and they will be taking my measurements for something you will NEVER BE. #HOFer. I got cleats with stronger thread then [sic] you!!!”

Oct. 23, 2016: Ramsey gets ejected late in the fourth quarter of the Jaguars’ loss to Oakland after he got into a fight with receiver Johnny Holton.

Nov. 20, 2016: Television cameras catch Ramsey crying on the sideline and saying “I’m tired of losing” late in the Jaguars’ 26-19 loss at Detroit. That was the fifth of what would be nine consecutive losses for the Jaguars.

Jan. 1, 2017: After the Jaguars’ 24-20 loss to Indianapolis to close out his rookie season, Ramsey, safety Tashaun Gipson, and cornerback Davon House complain about the way they were used in 2016. Ramsey also advocates a clean sweep of the defensive coaching staff.

“It’s frustrating for all of us but hopefully it’s complete, complete change. [A] complete flip will serve us good.”

June 16, 2017: Ramsey undergoes surgery to repair a core muscle injury. He is cleared for the start of training camp.

Nov. 5, 2017: Ramsey and Cincinnati Bengals receiver A.J. Green get into a brawl and are ejected just before halftime of the Jaguars’ 23-7 victory.

Ramsey and Green had been trash-talking throughout the first half, and things came to a head after a running play with less than 30 seconds to play. Green put his left arm on Ramsey’s right shoulder after the play, and Ramsey responded by shoving Green to the ground.

Green jumped back up, grabbed Ramsey around the neck and threw him to the ground. Green punched Ramsey multiple times while they were both on the ground as players from both teams rushed to break up the fight.

Jan. 7, 2018: In the Jaguars’ first playoff game in 10 years, Ramsey intercepts a pass with 26 seconds to play to seal the Jaguars’ 10-3 victory over Buffalo in an AFC wild-card game at TIAA Bank Field.

Jan. 14, 2018: During a rally after the team’s 45-42 AFC divisional playoff victory in Pittsburgh, Ramsey tells a crowd gathered at TIAA Bank Field that the Jaguars are going to beat New England in the AFC Championship Game.

“We’re going to the Super Bowl, and we’re going to win that b—-,” he tells the Jacksonville crowd during a postgame rally.

Jan. 21, 2018: Ramsey is critical of defensive coordinator Todd Wash’s decision to keep the defense in zone coverage most of the fourth quarter of the AFC Championship Game in the Patriots’ 24-20 victory.

“It was a difference from what we did in the first half and the second half in general and I’ll leave it at that,″ Ramsey tells the Florida Times-Union.

Aug. 13, 2018: Ramsey and defensive end Dante Fowler Jr. are suspended for a week for violating team rules and “conduct unbecoming of a Jaguars football player” after Ramsey went on a profane rant against members of the media who were filming a post-training camp practice altercation between Fowler and Yannick Ngakoue. Ramsey sent a tweet that threatened that players will wage war with the media. 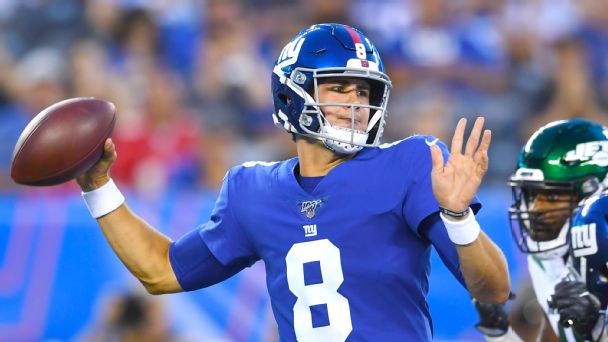 Aug. 15, 2018: GQ Magazine publishes a piece on Ramsey in which he criticizes numerous NFL quarterbacks. He called then-Buffalo rookie Josh Allen “trash,” said Matt Ryan was overrated and a product of Kyle Shanahan’s offensive system, said Jared Goff was “average to above average,” called Ben Roethlisberger “decent at best,” and said he didn’t think Andrew Luck was that good.

Nov. 11, 2018: Ramsey is responsible for three coverage busts, two of which resulted in touchdowns, in the Jaguars’ 29-16 loss to the Indianapolis Colts at Lucas Oil Stadium. Several of Ramsey’s posts on social media the next morning fuel speculation that he was unhappy and wants to play elsewhere.

The one that garnered the most interest was this tweet: “When I’m gone from here, y’all gone miss me. I ain’t even trippin lol”

Nov. 15, 2018: Ramsey says he wants to play his entire career in Jacksonville.

Nov. 18, 2018: On the day the Jaguars are to play the Pittsburgh Steelers, ESPN’s Adam Schefter reports that the Jaguars are likely to consider trading Ramsey in the offseason. Within an hour, the Jaguars release a statement refuting that report: “The Jaguars have zero intention of trading CB Jalen Ramsey. There is no truth to this rumor.”

Ramsey intercepts Roethlisberger twice, including an acrobatic catch in the end zone while covering Antonio Brown. The Jaguars still lose 20-16.

April 18, 2019: During a four-minute speech at the team’s annual state-of-the-franchise presentation, executive vice president of football operations Tom Coughlin calls out Ramsey and linebacker Telvin Smith for not attending voluntary workouts. Coughlin doesn’t mention either by name, but they are the only two players on the roster that were not at the workouts.

“It’s not about rights and privileges,” Coughlin said. “It’s about obligations and responsibility, and the question is: Can we count on you?”

April 19, 2019: Ramsey responds to Coughlin’s comments by saying that the team knows why he’s not there and that he’ll show up in shape when attendance is mandatory.

“‘Fully aware’ & ‘voluntary’ meaning I don’t HAVE to be there BUT they know the EXACT REASONS I am not,” Ramsey tweeted. “My teammates know it’s ALL love & know I’ll be ready when it’s time!”

Ramsey does not elaborate on what those reasons are. Neither did his agent, who also tweeted a statement.

“To be clear, Jalen Ramsey is exactly where Jalen should be during his off season,” David Mulugheta said. “He’s spending time with his young daughter & family while training in his hometown of Nashville. In addition the Jags are fully aware of why he is not taking part in the voluntary off season program.”

June 11, 2019: Ramsey says in a news conference after the second day of the team’s three-day mandatory minicamp that his agent told him the Jaguars will not be giving him a contract extension in 2019. Roughly an hour later, Ramsey jokes on social media that he’s going to “ask for so much money, they have to put me on layaway.” The Jaguars picked up Ramsey’s fifth-year option, which means he would make $13.703 million in 2020.

Jalen Ramsey arrives to Jaguars training camp in an armored bank truck, a not-so-subtle nod that the All-Pro defensive back is looking for a raise.

July 24, 2019: Ramsey reports to training camp in an armored bank truck. He’s accompanied by comedian Haha Davis, who jumps out of a truck with a bullhorn and loudly proclaims: “Y’all know what time it is. … A man so good they’re fixing to give him his own jail, Jalen Towers, because these receivers are on 24-hour lockdown. He’s got eight Master Locks in his pocket. They’re on lockdown all season. The man, the myth, Jalen Ramsey.”

Aug. 5, 2019: Ramsey makes an appearance on the Bussin’ with the Boys podcast, which is co-hosted by Tennessee Titans LT Taylor Lewan and former NFL player Will Compton. At one point during the show Ramsey says his ideal playing situation would be Nashville or Las Vegas if he were not with the Jaguars.

Sept. 15, 2019: Ramsey gets into a sideline altercation with head coach Doug Marrone. He’s upset because Marrone did not challenge a 3-yard completion to DeAndre Hopkins and Ramsey urged him to do so. Ramsey and Marrone have to be separated by safety Ronnie Harrison and strength and conditioning coordinator Tom Myslinski.

Sept. 16, 2019: Mulugheta tells the Jaguars that Ramsey wants to be traded.