FOXBOROUGH, Mass. — Bill Belichick loves to trade. He has made 167 deals since becoming coach of the New England Patriots in 2000.

Last week’s trade that sent receiver Demaryius Thomas to the New York Jets completed the circle for him, as the Jets had been the only team with which the Patriots hadn’t struck a deal during Belichick’s tenure.

“There was a certain period of time when there’s no way this transaction would’ve happened,” Belichick acknowledged, perhaps thinking back to the days when former Patriots assistant Eric Mangini was leading the Jets, or even Belichick’s early tenure in New England after abruptly resigning from the Jets.

Even current Jets coach Adam Gase said he wasn’t sure how an exploratory call from general manager Joe Douglas to the Patriots might be received.

“When [Antonio Brown] got there, we were kind of in a situation where if we could find someone that had knowledge of this system that could help us — and obviously Demaryius does — we were trying to figure out ‘How could we go about this?’ To Joe’s credit, he was like, ‘I’m just going to call them. The worst they could say is no.’ When they said ‘let’s talk,’ those guys worked it out.”

Now that Belichick has officially struck a trade with every team — and with the Patriots hosting the Jets on Sunday (1 p.m. ET, CBS) — here is one view of the most notable swaps he has made with each team:

Buffalo Bills: An easy choice, given how shocking it was he would send quarterback Drew Bledsoe to Buffalo on April 21, 2002, for a first-round draft choice the following season.

Miami Dolphins: The Patriots couldn’t cover slot receiver Wes Welker, so they decided to send second- and seventh-round picks to Miami on March 5, 2007, to acquire him. Some thought they paid too much at the time. It turned out to be a bargain.

New York Jets: Only one to choose from — Demaryius Thomas for a sixth-rounder in 2021.

Cincinnati Bengals: After New England shipped a second-round pick to Cincinnati for running back Corey Dillon on April 19, 2004, the hard-charging Dillon rewarded the Patriots with a single-season franchise-record 1,635 rushing yards.

Cleveland Browns: Cornerback Jason McCourty was going to be released by Cleveland, but the Patriots traded for him at the last minute on March 15, 2018, to ensure they wouldn’t have competition for his services. They gave up a sixth-rounder to get McCourty and a seventh-rounder, which was a shrewd move.

Baltimore Ravens: A draft-day swap in 2003 in which the Patriots landed Baltimore’s first-round pick the following year — and turned it into nose tackle Vince Wilfork — was a master stroke.

Pittsburgh Steelers: The third-ever trade made by Belichick, on April 21, 2001, was with the rival Steelers to move down in the second round (from 39 to 50) while picking up a fourth-round pick. The Patriots then wound up using the 50th pick as a chip, along with a sixth-rounder, to move up two spots to select left tackle Matt Light. It was a preview of how Belichick would wheel and deal on draft day.

Indianapolis Colts: Trading quarterback Jacoby Brissett for receiver Phillip Dorsett on Sept. 2, 2017, has been a win-win for both teams.

Clay: My draft board | 13 breakouts

Jacksonville Jaguars: On April 26, 2009, the Patriots acquired a seventh-round pick and a 2010 second-rounder in exchange for a 2009 third-round pick. Considering the seventh-rounder turned out to be Julian Edelman, that’s good business. They then used the second-rounder as a chip to move up and draft tight end Rob Gronkowski. Bonanza!

Houston Texans: Ryan Mallett, thought by some media analysts to be a potential starting-caliber quarterback at the time, was dealt for the paltry price of a seventh-round pick on Aug. 31, 2014.

Tennessee Titans: Landing linebacker Akeem Ayers and a seventh-round pick on Oct. 22, 2014, while giving up only a sixth-rounder, brought in an athletic playmaker who contributed to the team’s Super Bowl championship that year.

Denver Broncos: Shipping running back Laurence Maroney to Denver for a fourth-round pick on Sept. 14, 2010, was a coup because BenJarvus Green-Ellis had taken over the lead rushing duties. A draft-day trade in 2012 to move up in the first round to land linebacker Dont’a Hightower also rates highly.

Los Angeles Chargers: With only two trades to choose from, a 2008 draft-day deal gets the nod, as the Patriots shipped an ’08 third-rounder and received an ’09 second-rounder and an ’08 fifth-rounder. The fifth-rounder was part of a deal to draft special-teams ace Matthew Slater, who has been a pillar in the locker room, and on the field, ever since.

Kansas City Chiefs: Having placed the franchise tag on quarterback Matt Cassel, the Patriots felt they received good value for him by shipping him and Mike Vrabel to Kansas City on Feb. 28, 2009, for a second-round pick (34th overall) that turned into safety Patrick Chung. But the Patriots missed Vrabel’s leadership that season.

Oakland Raiders: Trading a fourth-round pick to acquire receiver Randy Moss on April 29, 2007, was a stroke of genius, as Moss revived his career in New England and totaled an NFL-record 23 touchdown receptions.

To celebrate 100 years of pro football, Peyton Manning travels the country to see the people and places that made the NFL the NFL.
Watch on ESPN+ » More »

Dallas Cowboys: A 2010 draft-day trade, in which the Patriots moved down from 24 to 27 in the first round, resulted in the pick of safety Devin McCourty. He’s been a nine-time captain.

Philadelphia Eagles: After losing Trey Flowers in free agency, the Patriots struck a deal for veteran Michael Bennett and a seventh-round pick on March 14, 2019, giving up only a fifth-rounder in return. 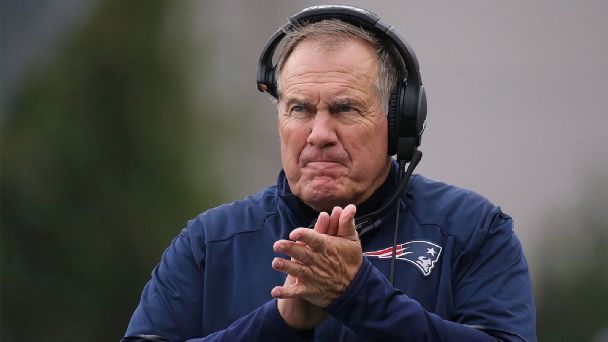 Chicago Bears: In need of a big-bodied nose tackle, the Patriots shopped a fourth-round pick to Chicago for Ted Washington on Aug. 19, 2003, and Washington was a rock in the middle of arguably the best defense in Belichick’s tenure. Close behind would be the 2016 trade for tight end Martellus Bennett that involved a draft-pick swap.

Detroit Lions: Getting linebacker Kyle Van Noy and a seventh-round pick on Oct. 25, 2016, in exchange for a sixth-rounder, has been a steal. Van Noy has been a key cog on two Super Bowl championship teams.

Green Bay Packers: Trading wide receiver Terry Glenn to Green Bay on March 8, 2002, in exchange for a fourth-round pick, ended Glenn’s headline-filled tenure in New England after he had arrived as a first-round pick in 1996.

Minnesota Vikings: When Randy Moss became a distraction, he was quickly shipped to Minnesota along with a seventh-round pick, in exchange for a third-rounder (Oct. 6, 2010). That was good value considering the situation in New England seemed close to an implosion. A 2013 draft-day trade — in which the Patriots traded their first-round pick (No. 29) in exchange for second-, third-, fourth- and seventh-round picks was a rare 4-for-1 swap (linebacker Jamie Collins Sr. and cornerback Logan Ryan were two of the picks).

Tampa Bay Buccaneers: While landing cornerback Aqib Talib for a 2013 fourth-round pick on Nov. 1, 2012, might have a strong case as the top choice, it was the acquisition of running back LeGarrette Blount — in exchange for running back Jeff Demps and a seventh-round pick on April 27, 2013 — that paid more championship dividends.

Carolina Panthers: One of Belichick’s trademark moves is trading into the next year’s draft to improve his positioning, which he did on April 24, 2010, by shipping a 2010 third-round pick (89th overall) to Carolina for a 2011 second-rounder. The second-round pick ended up being the second pick of the round (33rd overall), a jump of 56 spots for waiting a year. The only problem? The Patriots didn’t hit on the pick, selecting cornerback Ras-I Dowling, who never panned out.

Arizona Cardinals: It was a shocker when the Patriots dealt defensive end Chandler Jones to Arizona on March 15, 2016, getting two draft picks in return that they turned into guard Joe Thuney and receiver Malcolm Mitchell.

San Francisco 49ers: Shipping a 2007 first-round pick (28th overall) to San Francisco for a 2008 first-rounder and 2007 fourth-rounder was a double whammy because the Patriots turned the first-rounder into linebacker Jerod Mayo and traded the fourth-round pick for Moss. But the 49ers did well, too, using the 28th overall pick on offensive tackle Joe Staley. And, of course, there has to be a mention of the shocking trade of quarterback Jimmy Garoppolo for a second-round pick on Oct. 30, 2017, and the acquisition of offensive tackle Trent Brown and a fifth-rounder in exchange for a third-rounder on April 27, 2018.

Los Angeles Rams: It was a “wow” move on April 4, 2018, when the Patriots traded receiver Brandin Cooks for a 2018 first-round pick. The club used the selection on Georgia offensive lineman Isaiah Wynn.

Seattle Seahawks: Deion Branch, twice. It was notable when Branch’s holdout in 2006 led to him ultimately being traded to Seattle for a first-round pick on Sept. 11 that year … and then the Patriots traded for Branch on Oct. 12, 2010, when they needed an in-season boost at receiver.