The stakes will be high when Jan Blachowicz and Ronaldo “Jacare” Souza step into the Octagon for the main event of Saturday’s UFC Fight Night at Ginásio do Ibirapuera in Sao Paulo, Brazil.

Blachowicz (24-8) is a light heavyweight title contender, No. 7 in the ESPN rankings, coming off July’s knockout of former middleweight champion Luke Rockhold. And now comes another ex-185-pounder. Souza (26-7) is moving up to 205 in the wake of April’s loss to Jack Hermansson, his second defeat in three fights.

But Jacare can become an instant contender with a win, and Blachowicz needs to have his hand raised to avoid falling out of the top 10. 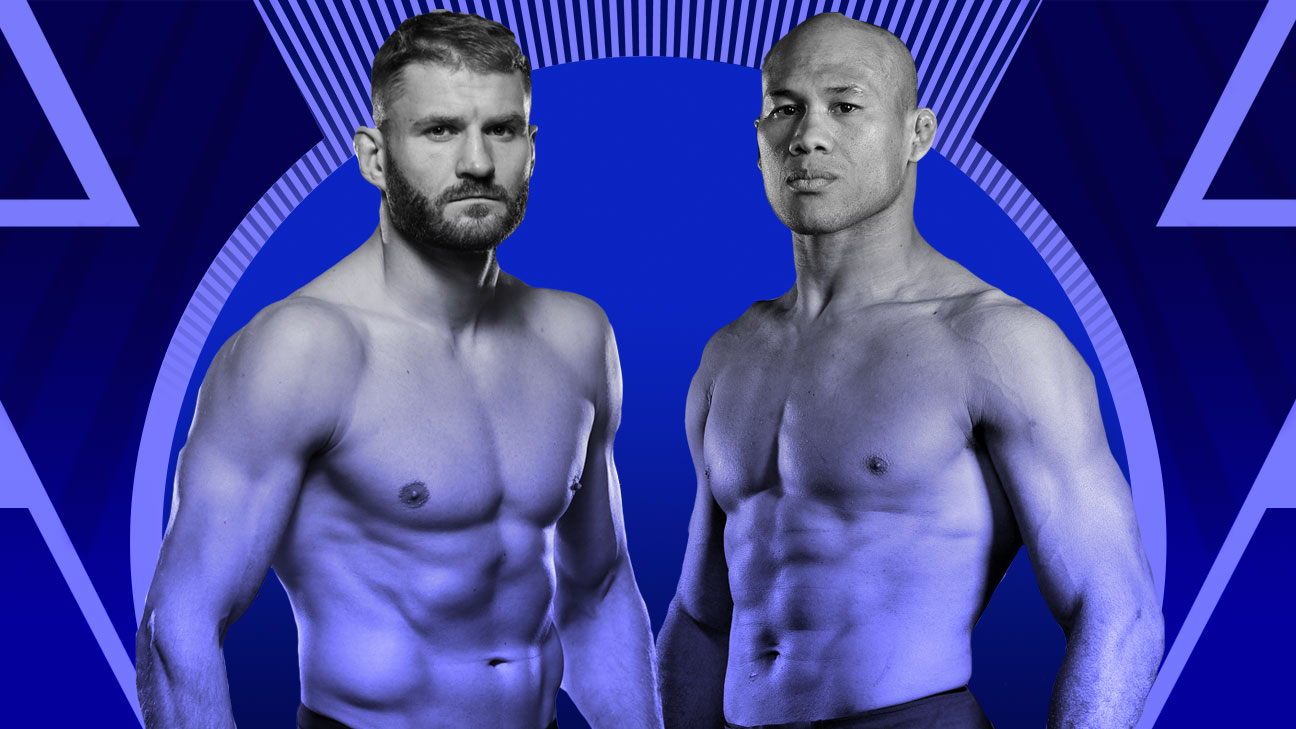 This main event will be the finale of a long night of Brazil vs. the World. Jacare is one of 15 Brazilians on the card, with at least one in each of the 12 fights. And there are some legendary names among them, most notably Mauricio “Shogun” Rua, who fights in the co-main event. Shogun, a former UFC light heavyweight champion, has won eight postfight bonuses in his time with the promotion. He’s already in the UFC Hall of Fame, for his wild 2011 fight with Dan Henderson.

Rua’s opponent, Paul Craig, is a Scotsman who is on the verge of the UFC record book. He has won two fights in the promotion by triangle choke; one more would give him the record. A Craig submission of any kind would be his fifth, tying the light heavyweight record.

Here’s the lineup, results and recaps:

From ESPN Stats & Info: Ramos wins his second straight with his seventh career submission win. He moves to 5-1 in the UFC, but his first at featherweight after starting his UFC career at bantamweight.

Bobby Green and Francisco Trinaldo get off to a heated start in the first round of their bout at UFC Fight Night. For more UFC, sign up here for ESPN+ http://plus.espn.com/ufc.

“It was a good fight, a tough one,” Trinaldo said. “I didn’t expect his ground game. I actually trained more striking during my camp. But I am happy that I can leave with a win and once again here in Sao Paulo.

“I would like to face Edson Barboza next. He is the best Muay Thai athlete in Brazil. I think it would be a great match.”

From ESPN Stats & Info: Trinaldo extends his record of UFC wins in Brazil to 12.

“I plan to get the finish every time I get out there and fight — that is my goal,” Brown said. “It wasn’t exactly how I wanted to be, but we are still working. I am getting better. The first round, I got a little slow start. I slipped at the beginning and did not want to use too much energy trying to get up. Second round, I just went back to what I am good at and won the fight.

From ESPN Stats & Info: It was the fourth career submission win for Brown, second in the UFC. He extends his win streak to two. Brown has 10 finishes in 12 career wins.

Douglas Silva de Andrade lands a flurry of punches that catches Renan Barao off guard in their bout at UFC Fight Night. For more UFC, sign up here for ESPN+ http://plus.espn.com/ufc.

From ESPN Stats & Info: Silva de Andrade moves to 4-3 in the UFC with his sixth career win by decision. Barao loses his fifth consecutive fight. Since losing the bantamweight title to TJ Dillashaw in 2014, Barao is 2-7. Barao’s losing streak is tied for second longest among former UFC champions, behind BJ Penn’s seven.

“I had promised it would be an action-packed fight, and I think I fulfilled that,” Silva said. “I put on a show to the fans. I thank UFC for believing in my work, and it was a great honor to fight Renan Barao, an athlete that I always admired, always made sure to watch his fights. He is a former champion, has a legacy, and deserves all the credits.”

Ariane Lipski wastes no time as she opens up with a flurry of shots to Isabela de Padua at UFC Fight Night. For more UFC, sign up here for ESPN+ http://plus.espn.com/ufc.

“They booed me, but no one knows what’s going on behind the scenes,” Lipski said. “I made weight, I did my part. I trained for four months, my opponent changed four times during my camp. I accepted this fight with one-day notice. I could have not accepted, but I agreed because I prepared so much for that day. I did my best. I know I won every round, but I also know that I can’t please everyone.

“That was not even a submission (that she had on me). I train jiu-jitsu and participate in jiu-jitsu tournaments. That was an inverted triangle, and I was just trying to get out. She was not locking me in; there is no submission in that position.

“I’m so thrilled that I got the win at home – it’s a dream I’ve had since I started in the UFC. Last year was not my best moment as an athlete, but today I knew I would come out with the win anyway.”

Tracy Cortez lands multiple punches to the body of Vanessa Melo in the last 25 seconds of their bout at UFC Fight Night. For more UFC, sign up here for ESPN+ http://plus.espn.com/ufc.

“It was a hectic week, but I have the right coaches to keep my mind at ease and nothing affected me,” Cortez said. “I just stayed focused on the fight. About the fans, I knew the crowd was not going to like me at first, but Brazil is amazing. The fact that they can just cheer someone on like they did is mind-blowing. I pray that when I fight in my hometown they cheer for me like that.”