There are only 10 days left in MLB’s regular season, but five playoff spots are still up for grabs. As the hunt for October comes down to a few huge late-season series, we’re about to find out who’s in and who’s out.

Here’s what we’ll be watching this weekend:

There’s still a lot to be decided in the NL playoff chase, with Cardinals-Cubs the big matchup, and Pirates-Brewers and Nats-Marlins also impactful series. Among the four teams fighting for three spots (NL Central, two wild cards), what single factor will have the biggest role in determining who’s in and who’s out?

Eddie Matz: Washington’s schedule. The Cards, Cubs and Brewers all play six games during the final week of the season. Meanwhile, thanks to having no off day and playing a makeup doubleheader, the Nationals are slated for eight games over the final seven days. That’d be tough sledding for any club, but especially so for the Nats, whose bullpen has about as much depth as a kiddie pool. It doesn’t help that Washington’s competition next week (the Phillies and Indians) is the toughest among this quartet of contenders. If the Nats manage to hang on and make it to the wild-card game, they certainly will have earned it. (But I don’t think they’re going to earn it.)

Sam Miller: The Brewers’ bullpen. The other three teams in the race all have relatively traditional workhorse rotations — each has four starters who will qualify for the ERA title, and the Brewers have none. Rather, like last year, their September success has come with the congealment of the bullpen, pieces picked up throughout the year, or shuffled into new roles, or simply peaking at the right time. This month has been the Milwaukee bullpen’s finest, with season-best walk and strikeout rates and a season-best ERA. That’s crucial: The Brewers’ rotation is built to go four or five innings per start — only two starters have gone deeper than that this month, only two have thrown as many as 90 pitches, and none has gone seven or thrown 100. Milwaukee showed us last year what a hot bullpen can do in short, urgent bursts, and they’re trying to do it again, with an almost all-new cast (plus Josh Hader).

David Schoenfield: I’m going with the Cubs’ offense — the one currently playing without Javier Baez and that just got Anthony Rizzo back after that sprained ankle — improbably he was on a scooter Wednesday and started Thursday. I mean, how far can Nico Hoerner carry this team on his back? The Cardinals and Nationals also have a little more margin for error, and the Brewers have the easiest schedule, so the Cubs have their backs up against the wall. They will also end the season with six games on the road — where they are a miserable 31-44 this season. They will also be reminded of how the offense tired down the stretch last year. Good luck, boys.

In the AL, the series to watch are Red Sox-Rays, Rangers-A’s and the interleague Phillies-Indians matchup (Sunday Night Baseball, 6:30 p.m. ET, ESPN), with Tampa Bay, Oakland and Cleveland in the running for the two wild-card spots. Same question as above: What is the most important factor in the AL playoff race? 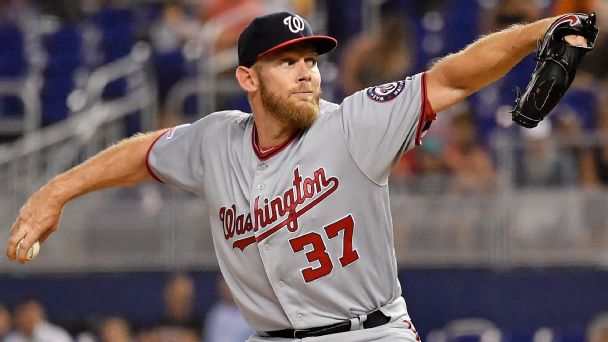 Pirates at Brewers, Fri., 8:10 p.m. — Last Friday in Chicago, the Cubs clocked Pirates starter Steven Brault for 10 runs in 2⅔ innings to kick off a three-game sweep in which they scored 47 runs. If the Brew Crew can blast Brault, too, perhaps it’ll set the tone for more Bucs bashing this weekend, with a playoff spot on the line.
Nationals at Marlins, Sat., 6:10 p.m. — Stephen Strasburg has faced the Fish four times this season, winning all four games and striking out 43 in 30⅓ innings to the tune of a 1.19 ERA. Washington, which has lost four of its past five series, desperately needs one more of those performances from Stras.
Cardinals at Cubs, Sun., 2:20 p.m. — Yu Darvish struck out eight Reds in a row his last time out, but took the loss. The Cubs won’t care how many Cards he K’s on Sunday if he can shut down St. Louis to close out their crucial NL Central series.
Phillies at Indians, Sun., 6:30 p.m. (ESPN) — By Sunday, the Phillies could be playing for pride — or, who knows, they could be making things interesting in the NL wild-card race. Speaking of wild-card races, though, it’s the Indians who are the headliner here for now, as part of a three-team battle in the AL.
All times ET

Matz: Healed hurlers. The A’s have welcomed back stud left-hander Sean Manaea and top prospect Jesus Luzardo. Reigning Cy Young winner Blake Snell and early season breakout star Tyler Glasnow have returned to the Rays. Meanwhile, the Indians haven’t been quite as fortunate, as ace Corey Kluber remains sidelined and fellow right-hander Carlos Carrasco has been limited to six outs or fewer since coming back earlier this month. For a Cleveland team currently on the outside looking in, that’s suboptimal.

Miller: Caveat: Sometimes really good teams rest their players as they gear up for their playoff assignment, and sometimes really bad teams are, by September, hot or filled with great call-ups. But the schedule gap between the A’s and the Rays is about as wide as Oakland could hope for: The Rangers, Mariners and Angels have a combined winning percentage of .441, and half of their good players are out for the year. Meanwhile, the Red Sox, Yankees and Blue Jays are a combined .535. (Cleveland’s opponents: .483.) Again, that’s not destiny. But baseball games are zero-sum affairs, and every ounce of quality your opponents have is as significant as whatever ounces you, yourself have. It makes it really unlikely the A’s could lose this by any method other than total collapse.

Schoenfield: The A’s lead the wild-card race and have that easy schedule, so I think they’re in. So I’m looking at the Rays and Indians and point to the Tampa Bay rotation … bullpen. As Eddie said, Snell and Glasnow just returned, but Snell went only two innings and Glasnow has gone two and three. That means Kevin Cash has to get a lot of work from his relievers in games those two start. It’s remarkable, really: Charlie Morton has been the only constant in the rotation all season. In the bullpen, keep an eye on Nick Anderson. Since he came over from the Marlins, he has pitched 18 innings, given up nine hits, struck out 35 and issued zero unintentional walks.

The Year of the Home Run continues unabated, with the Twins and Yankees on the verge of reaching 300 each. In five words (no more, no less), sum up your feelings on this season’s long-ball binge.

Schoenfield: It was fun at first.

Setting aside Thursday’s opener to the four-game Cardinals-Cubs series, which team will take two of three (or three of three) this weekend at Wrigley?

Who has clinched a postseason spot and who could be next?
Playoff tracker

Matz: The Russell-less, Baez-less and Rizzo-less Cubs have been able to get by recently against mediocre competition. The Cards are far from mediocre these days. Therefore, I’ll take them.

Miller: Somebody should mention that the Cubs have been invincible at home this year, though I don’t really believe that’s likely to persist. Still, even regular, non-invincible home-field advantage is significant, and the Cubs are now past Jack Flaherty in this series and get to skip the resurgent Adam Wainwright. So I’ll take them against the three worst FIPs in the Cardinals’ rotation, without much conviction.

Schoenfield: The Cubs dig down and take two of three weekend games. Because Nico Hoerner. And because we want a four-way tie between the NL Central teams and the Nationals.

Among the players on the seven teams fighting for a playoff spot (Rays, A’s, Indians, Nationals, Cardinals, Cubs and Brewers), who will have the most total bases this weekend?

Law: Players I was wrong about

A home run mark for all 30 teams

Matz: Drawing the Pirates for the final stretch of a pennant chase/MVP race is like getting the million-dollar question on “Who Wants To Be A Millionaire” when you have all your lifelines left. And your uncle is a writer on the show. And he just had dinner at your house and told you what the million-dollar question (and answer) was going to be for your upcoming episode. Sadly, Christian Yelich is not an option. So I’ll take Keston Hiura.

Miller: Baseball is weird and anything can happen, but drawing the Marlins for the final stretch of a pennant chase/MVP race is like getting a Final Jeopardy category on which you did your doctoral research. I’ll take Anthony Rendon.

Schoenfield: Funny thing, Nicholas Castellanos is playing these days like the baseball version of Ken Jennings and James Holzhauer. And speaking of the Daily Double, that’s what Castellanos hits every day. He’s only four doubles shy of becoming the first player since 1936 to reach 60 doubles.

Schoenfield: Lance Lynn for the title