The NHS in North-East England is making an effort to exploit the skills of doctors who arrived in the UK as refugees. But well-trained doctors from one country, who would love to practise here, are still having to spend their days working in factories or delivering pizzas, reports the BBC’s Emma Jane Kirby.

Dr Yemane does not want to do this interview. For the first 15 minutes we spend drinking Ethiopian coffee together in a little cafe not far from Middlesbrough train station, he lets his friends and colleagues do the talking, replying to my questions extremely politely but with an obvious reserve. He’s concerned that someone might think he’s moaning, that he’s complaining about his lot. Push him about his feelings and he clears his throat, shifts uncomfortably in his chair and offers only that, “Things might occasionally be a little tough.”

In truth, things have been far more than “a little tough” for 35-year-old Yemane, a refugee from Eritrea. After implicitly criticising his country’s health service at a public meeting in 2014, his life was threatened by the ruling military and he had to flee, eventually ending up in Birmingham where he was granted political asylum.

“As much as I thank the UK for being a safe haven for me and giving me refuge, there’s a feeling of incompleteness,” he says quietly. “Because a refugee doesn’t want to be a burden on society and I know I could offer this society a lot more.”

Yemane has found work in a factory, as a care assistant, and as a volunteer in a refugee charity. He picks up the large tome on the chair beside him and flicks through the pages. It’s a book on pharmacology. He’s soon absorbed in its pages. Because Yemane is actually a qualified doctor – he’s just not allowed to practise in the UK.

Yemane was among the second intake of students at the Orotta School of Medicine and Dentistry set up in 2004 in Asmara, Eritrea, with the help of Cuban academics. He studied there for eight years, covering a wide range of disciplines from neurology to surgery. Examinations were monitored externally by professors from Switzerland, the US and Sudan. Yemane has a record of every semester he spent studying there and he tells me modestly that he “doesn’t want to exaggerate” but that he is confident that the level of study at Orotta School of Medicine was as rigorous and thorough as any British medical school and that he was “competent” at his studies. In fact, his report card shows he passed almost every exam at Grade A.

But for the General Medical Council (GMC), the body that regulates and registers doctors in the UK, that’s not enough. They need verification from the Eritrean authorities and the Orotta School of Medicine that Yemane’s primary medical qualification is exactly what he claims it is. The problem is that Eritrea is an authoritarian state and will not acknowledge citizens who have fled the country. 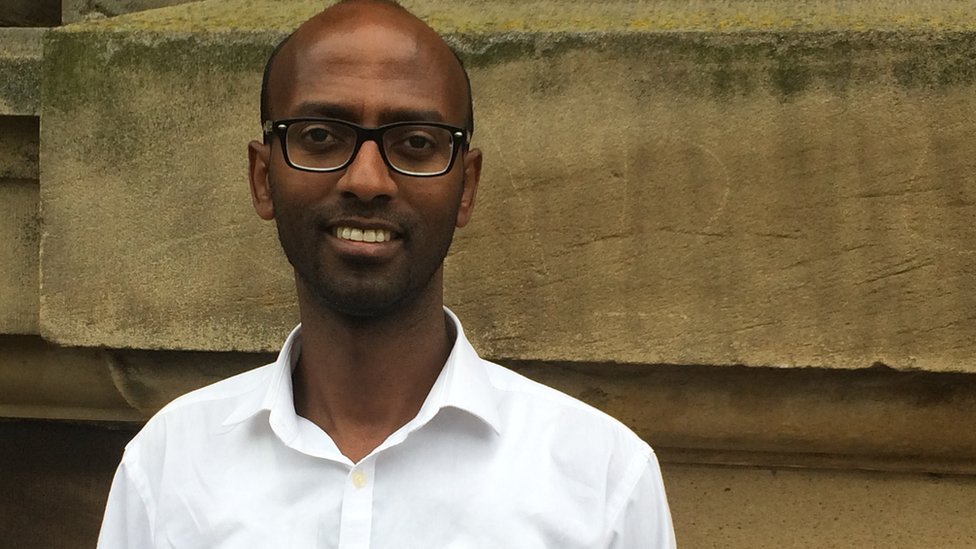 “Of course they won’t respond, of course they won’t release information,” says Bini Araia, a fellow Eritrean who works with the Middlesbrough-based charity, Investing in People and Culture, which is helping North Tees and Hartlepool NHS Trust get refugee doctors back into practice.

“It’s one way of controlling and making refugees’ lives difficult so that they can never succeed outside if they leave their country.

“Eritrea is not a friend of the West. It is the North Korea of Africa, it’s heavily militarised and it’s a dictatorship. It’s not going to co-operate with the GMC.”

It’s a bitter irony for Yemane that he moved from Birmingham to Middlesbrough precisely because he’d read a BBC article about the pioneering scheme set up by Bini Araia in partnership with North Tees and Hartlepool NHS Trust.

From his reading he also knew that the Teesside region has an acute shortage of medical practitioners. He was immediately accepted on the scheme and unusually, passed the very rigorous English exam at first sitting and with flying colours. The next step was sitting the two necessary medical exams known as Plab 1 and Plab 2 but as Yemane knuckled down to revision, the GMC blocked his attendance. Yemane is too polite to slate the GMC for its caution. He says only that he would hope the GMC might try to find a way around the problem.

Read her earlier report on refugee doctors working on Teesside

“I am very grateful for their efforts,” he says diplomatically. “But sometimes I think maybe they could do just a little bit more?”

His supporters are a little more outspoken.

“It’s just so frustrating!” says Dr Margaret Hinman, a retired Teesside GP, who has been lobbying for Yemane and helping him with private study.

“I totally understand that patients’ safety is paramount but surely we can find a solution to get this situation righted?”

She looks over at Yemane who is absorbed in the pharmacology text book she’s lent him, absent-mindedly lacing a stethoscope through his fingers.

“I mean, here we have a young man who has overcome so many difficulties, a ready-made doctor who wants to work and who wants to make Teesside his home – and we have so many vacancies here!”

She reminds me of the success of the scheme – four refugee doctors are now working full time in the NHS, five more are about to be registered while a handful of others are sitting their medical exams.

“And there’s no reason to think Dr Yemane is any less qualified than anyone else,” she adds.

“We have information from the former dean of medicine [at the Orotta School of Medicine], we have Yemane’s curriculum and what’s so frustrating is that other EU countries like Austria and Sweden – whose guidelines I’m sure are just as stringent as ours – are able to accept that same paperwork and let Eritrean doctors practise.”

Doctors like Dr Sahle, a classmate and close friend of Yemane, who fled Eritrea about the same time. Sahle claimed asylum in Austria rather than in the UK, however, and once he got settled status, was able to present his paperwork to the Austrian authorities and start his German-language tests and rigorous medical retraining. He now works full time as a doctor in a large hospital in Graz, south-east Austria, where he’s hoping to specialise in internal medicine. We have to wait a couple of weeks to set up a Skype call together because he is run off his feet.

“It’s not fair,” he tells me. “Because I remember Dr Yemane as a caring doctor, very professional and hard-working. If they could just give him the opportunity I’m sure he’d show them just how competent he is.”

Sahle reflects on how much he loves his job and how, now that he can map out a career path, he feels he has really started his new life in Europe. Twice a week, he calls his friend Yemane to share news. Listening in to one of their conversations, it’s painful to hear how hungry Yemane is to learn about the cases his old friend has been working on, and how careful Sahle is to answer his questions with tactful restraint.

“I am working and he is not,” he reminds me. “But I have the same documents he has – nothing more.”

Bini Araia from Investing in People and Culture says there are at least four other qualified Eritrean doctors in the UK who are desperate to work here. Instead he says they are working for delivery companies, in pizza restaurants and factories.

“It bleeds my heart,” he says with genuine feeling. “They have already given up so much. Why must we punish them again?”

Jane Durkin, assistant director for registration at the GMC, sighs when I talk to her about the waste of human potential. She reminds me that the primary concern of the GMC is to protect patients and to make sure all the doctors the body registers have the relevant skills. She sounds as frustrated as Yemane’s supporters when she recounts the efforts the GMC has made to contact the Eritrean authorities and the complete silence those efforts have been met with.

When I remind her that other European countries have accepted the same paperwork that Yemane has as proof of training, she concedes that that is a reasonable point but says she cannot comment on other countries’ practices.

“We don’t want to put up barriers,” she insists. “But the law requires us to validate qualifications.”

But is it realistic to expect a political refugee to have fled for his life carrying all his documentation and professional paperwork in a neat folder, stamped and endorsed by the very authoritarian regime he has escaped from?

Jane Durkin admits that the paperwork the GMC has been requesting will almost certainly remain unobtainable.

And then quite suddenly she announces that the GMC has decided that the Eritrean doctors’ case is a truly exceptional one and it is for this reason that the doctors will now be allowed to take their Plab 1 and Plab 2 examinations.

I ask her to repeat herself to make sure I have understood.

“Yes,” she says, and there is a good-natured smile in her voice. “We are going to let them sit their exams.”

I check this means that Yemane, if he passes his exams as he’s predicted to do, will then automatically be registered as a doctor and will be able to apply for jobs in the NHS.

There’s a pause on the line.

“Er, no,” says Jane Durkin. “If he passes the exams that will prove he has the knowledge to pass the tests, but we still need to verify his primary qualification – we have to work with the UK’s legal framework.”

She sounds apologetic. “I know it sounds jobsworth. But he can get on with his training while we will pursue all avenues to piece together the evidence.”

This is still a massive leap forward for the Eritrean doctors and is enough for Yemane and his Middlesbrough supporters, Bin Araia and Margaret Hinman, to order a celebration cake.

“We’re buzzing!” says Yemane. “I am so happy and my colleagues are all so happy – we are moving in the right direction and it is the greatest news!”

Bini Araia has to leave the gathering early to attend a meeting at North Tees hospital. He has promised Yemane that while he is studying for his medical exams, which will probably take a year to complete, his refugee charity will work tirelessly to help the GMC find the proof it needs via third parties, to satisfy the demands of UK law.

Meanwhile, Yemane is already deep in his medical text books. He’s been dreaming of becoming a doctor since he was six years old. Perhaps now that vision will once again be realised and by September 2020, he’ll be accompanying Bini to North Tees hospital to start work and his new life.

The mother of a child who developed meningitis and sepsis because of a bacterial infection called Group B Strep is calling for all pregnant women to be tested for it. Currently the test is only available privately – and some women are still not being told about the potential danger to their baby.

Group B Strep: ‘A common bug could have killed my baby’